Al-Arabiya television said it had obtained a video showing some 2,500 Iraqi soldiers in the desert area east of the Iraqi city of Karbala after they quit their positions on the border 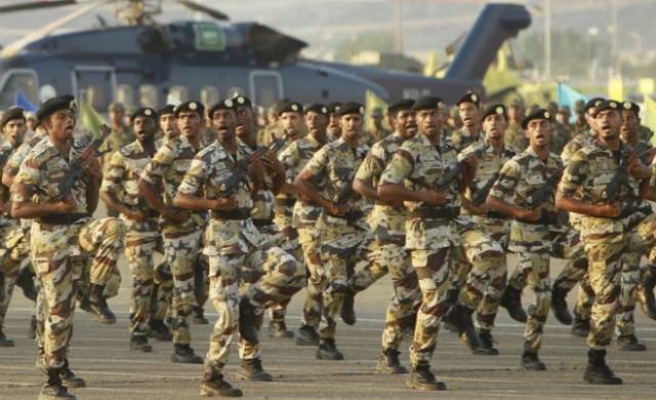 Saudi Arabia has deployed 30,000 soldiers to its border with Iraq after Iraqi soldiers withdrew from the area, Saudi-owned al-Arabiya television said on Thursday.

The world's top oil exporter shares an 800-km (500-mile) border with Iraq, where Islamic State insurgents and other militant groups seized towns and cities in a lightning advance last month.

The Dubai-based al-Arabiya said on its website that Saudi troops fanned into the border region after Iraqi government forces abandoned positions, leaving the Saudi and Syrian frontiers unprotected.

The satellite channel said it had obtained a video showing some 2,500 Iraqi soldiers in the desert area east of the Iraqi city of Karbala after pulling back from the border.

An officer in the video aired by al-Arabiya said that the soldiers had been ordered to quit their posts without justification. The authenticity of the recording could not immediately be verified.

However, the Iraqi prime minister's military spokesman, Lieutenant General Qassim Atta, told reporters in Baghdad: "This is false news aimed at affecting the morale of our people and the morale of our heroic fighters."

He said the frontier, which runs through largely empty desert, was "fully in the grip" of Iraqi border troops.

Saudi Arabia's Interior Ministry security spokesman, Major General Mansour Turki, said: "We have not experienced any insecurity close to our border, and our border is secured and protected long before the latest events in Iraq."

Diplomatic sources in the Gulf say Saudi Arabia's border with Iraq is relatively well defended, but that its frontier with Jordan might provide an easier route for any militants trying to enter Saudi Arabia from Iraq.