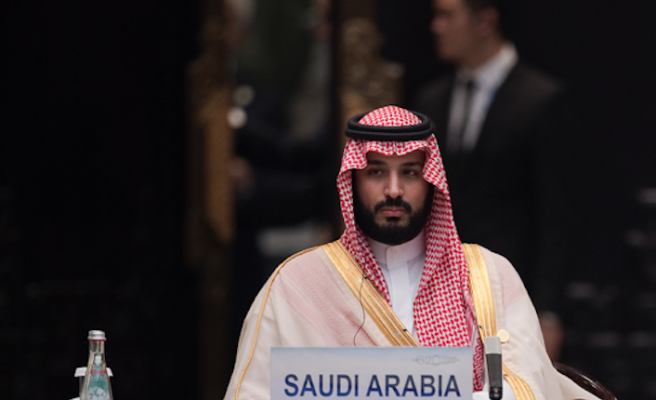 While the mystery behind the murder of Saudi journalist Jamal Khashoggi remains unsolved, Crown Prince Mohammed bin Salman appears ready to scapegoat some of his closest associates for the crime after the kingdom admitted that the killing was carried out at its consulate in Istanbul.

Khashoggi, a columnist for The Washington Post, had gone missing since entering the Saudi consulate on Oct. 2.

After days of denying knowledge of his whereabouts, Saudi Arabia last week claimed that Khashoggi died during a “brawl” in the consulate.

King Salman bin Abdulaziz sacked the deputy head of the country’s intelligence agency and a top aide and ordered the arrest of 18 suspects over the case.

The image of Crown Prince bin Salman, who has made considerable efforts to improve the country’s image on the international stage, has been harmed more than he had expected by Khashoggi’s murder.

Bin Salman began sacking some of those closest to him in a bid to avoid the crisis, which has cast a shadow over his ambitions.

Anadolu Agency correspondents have researched four people known for their closeness to bin Salman who were sacked from their posts when Saudi Arabia admitted the killing was carried out in their Istanbul consulate.

Saud al-Qahtani, a top aide to the crown prince, deputy intelligence chief Ahmad Asiri, Maher Abdulaziz Mutreb, a royal guard, and the Interior Ministry’s head of forensic medicine Salah Mohammed al-Tubaiqi have all gained notoriety as the “prince’s men” in the Khashoggi killing.

Al-Qahtani is known as the leader of the "electronic flies" that carry out smear campaigns on social media targeting those against the new administration under bin Salman’s leadership and the people and institutions who have a potential to do so.

Born in 1978 in the capital Riyadh, he studied at King Saud University’s Faculty of Law and later did his Masters at the Naif Arab University for Security Sciences.

Working at the rank of minister at the Royal Court, he earlier served as a Royal Court media adviser and was appointed as an adviser to the office of the crown prince during King Abdullah’s rule.

Sources who have close ties to the royal family call al-Qahtani the “privy secretary” of bin Salman.

According to the sources, he also speaks on behalf of the crown prince on many occasions and gives instructions to some security forces.

In an interview with a U.S. magazine, Khashoggi said al-Qahtani was authorized in the communication unit of the Kingdom during King Abdullah bin Abdulaziz’s time and added that he was close to al-Qahtani and knew him well.

Stating that he became an important person due to his post, Khashoggi added that he controlled the public relations of the unit and Saudi media organs.

In one of his columns in The Washington Post, Khashoggi also said al-Qahtani had a list of  Saudi critics and called on Saudi citizens to contribute names to this list.

In reply to the “black list” mentioned by Khashoggi, al-Qahtani wrote last year on Twitter: “Do you think I make decisions without guidance? I am an employee and a faithful executor of the orders of my lord the king and my lord the faithful crown prince.”

On the other hand, it is claimed that al-Qahtani established the "electronic flies" social media team to follow daily posts and movements and prepare reports on them.

The world has known Maj. Gen. Ahmed Al-Assiri as spokesman of the Arab coalition formed under the leadership of Saudi Arabia to conduct military operations against Yemen.

He studied History at the world-famous Sorbonne University in Paris and national defense in France.

He served as a French interpreter during the First Gulf War, known as 'Operation Desert Storm', which began in August 1990.

Al-Assiri became an advisor to the Saudi Defense Minister in 2014 and was appointed as spokesman of the Saudi-led Arab coalition established to conduct military operations against Yemen in 2015.

Saudi media reports that he is also a skilled pilot.

The BBC said Al-Assiri was 'suspiciously' sacked over the affair by the Saudi crown prince.

Maher Abdulaziz Mutreb, a frequent companion of Saudi Arabia’s crown prince and a colonel in Saudi intelligence, is the mastermind of Khashoggi’s murder, according to the London-based Al-Quds Al-Arabi newspaper.

Mutreb was leading the Saudi team that came to Istanbul in the early hours of Oct. 2.

Arab media said Mutreb served as a security attaché at the Saudi consulate in London in 2007 and met Khashoggi in the UK capital.

He was assigned to a brigade in the Saudi Royal Guard to protect senior figures and  became a frequent companion of the crown prince.

Mutreb travelled with bin Salman to the U.S. in March and was alongside him during trips to Spain and France.

A BBC story said Mutreb was trained by a European hacker group in hacking and cyber spying in 2011 in Riyadh.

Arab media reported that he was the leader of the 'hit team' that came to Istanbul in private jets that had been rented in his name.

Mutreb was thought to have received electronic information about Khashoggi and interrogated the Saudi journalist.

Arab media added that Mutreb called Saudi Arabia 19 times - including four phone calls to the office of bin Salman's secretary - on the day of Khashoggi’s murder.

Known as Crown Prince bin Salman’s righthand man, Salah Muhammad al-Tubaiqi is thought to be one of the major figures acting on the crown prince’s behalf inside and outside the country, reported The New Arab, a London- based daily.

Several reports by Arab and international media said that Tubaiqi, as head of the forensic medicine department in the Saudi Interior Ministry, had arrived in Istanbul on the day of Khashoggi’s disappearance to destroy evidence relating to the case as part of a 15-person team.

Born in 1971 in southeastern Saudi Arabia, Tubaiqi left the country in 2004 to study forensic medicine at Glasgow University in the UK.

Upon returning, he worked as a pathologist in Riyadh and Dammam, where he conducted several studies on murder cases. He also worked for a short time as a visiting forensic medicine specialist at Australia’s Victorian Institute of Forensic Medicine.

Tubaiqi, who has held various senior positions in forensic medicine in Saudi Arabia, is known as one of the country’s foremost specialists in this field as well as in medical ethics.