Saudi Arabia, the United Arab Emirates and Bahrain have collectively recalled their ambassadors from Qatar. 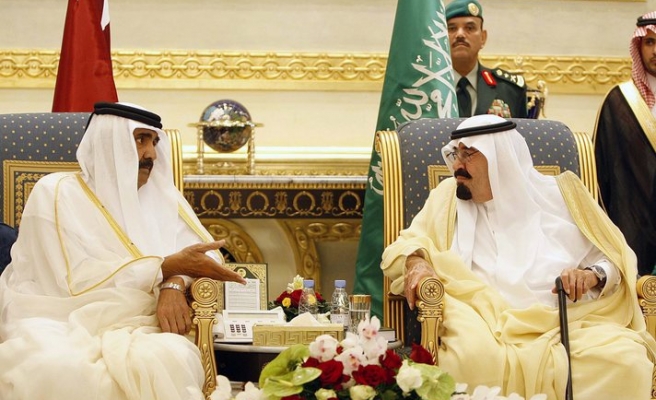 Saudi Arabia, the United Arab Emirates (UAE) and Bahrain withdrew their ambassadors from Qatar on Wednesday in an unprecedented split between the Gulf Arab allies who have fallen out over political turmoil shaking the Middle East.

The move escalated an internal power struggle over foreign policy in the GCC, which also includes Kuwait and Oman, and represents a significant challenge for Qatar's young ruler months after he took power.

A pro-Western alliance of absolute monarchies, the GCC was set up in the 1980s as a counterweight to Iranian influence in the Gulf, and includes several of the world's biggest oil and gas producers and exporters.

Saudi Arabia, the biggest GCC state by population, size and economy, has grown increasingly frustrated over recent years at the efforts of Qatar, a country of just 2 million, to leverage its large wealth from gas exports into regional clout.

Qatar's stock market tumbled 2.3 percent after Wednesday's announcement. There is significant cross-border investment in the stock markets of GCC countries by investors from other GCC nations; Saudi investors play a major role in all GCC markets.

The statement follows two years of efforts by Saudi Arabia to build a closer union between the GCC countries on foreign and security policy in an effort to cement a united front against what it sees as Iranian aggression.

However, Gulf analysts and diplomats say it is too early to cast doubts on the ability of the GCC to hold together, pointing towards previous disagreements between member states that were later settled. Many GCC members have decades-old border disputes with each other, but efforts to resolve them are normally pursued without any apparent acrimony.

Qatar has been a maverick in the conservative region of royal dynasties, backing Islamist movements in Egypt, Syria and elsewhere in the Middle East that are viewed with suspicion or outright hostility by some fellow GCC members.

Qatar on Wednesday voiced its regret over the recall of the ambassadors of three Gulf States from Doha, expressing its "surprise" at the move.

"The Qatari cabinet expresses its sorrow over the decision by Saudi Arabia, the United Arab Emirates (UAE) and Bahrain to recall their ambassadors," the cabinet declared in a statement.

The cabinet was quoted by Qatar's official news agency as saying that the three countries had taken the decision based on disputes that lay outside the Gulf Cooperation Council (GCC)'s purview.

The cabinet did not, however, specify the nature of these disputes, but said it would not retaliate by recalling its own ambassadors from the three countries in question.

"Brotherly ties between the Qatari people and other peoples of the Gulf prevent us from following suit and recalling our ambassadors," the cabinet said.

Sheikh Tamim bin Hamad al-Thani, in his early 30s, said when he succeeded his father in June 2013 that Qatar would not "take direction" in foreign affairs, suggesting he would continue Doha's assertive, independent-minded foreign policy.

Saudi Arabia and the UAE are fuming especially over Qatar's support for the Muslim Brotherhood, an Islamist movement whose political ideology challenges the principle of dynastic rule, and by its playing host to its spiritual leader Yusuf Qaradawi.

The statement said GCC members had signed an agreement on Nov. 23 not to back "anyone threatening the security and stability of the GCC whether as groups or individuals - via direct security work or through political influence, and not to support hostile media".

Saudi and other Gulf Arab officials, as well as leaders of the military-backed government in Egypt, often complain about Qatar's al Jazeera satellite TV station, which they see as being openly supportive of the Brotherhood and critical of their governments. Al Jazeera says it is an independent news service giving a voice to everyone in the region.

Egyptian airport sources said on Wednesday Qatari citizens would be subject to additional security screening measures "to make sure that they are not involved in hostile acts against Egypt, either through the media or business". They said Qatari diplomats and special passport holders could not now enter Egypt without visas, applying the principle of reciprocity.

The Saudi-UAE-Bahraini statement said GCC foreign ministers had met in Riyadh on Tuesday to try to persuade Qatar to implement the agreement.

"But unfortunately, these efforts did not result in Qatar's agreement to abide by these measures, which prompted the three countries to start what they saw as necessary, to protect their security and stability, by withdrawing their ambassadors from Qatar starting from today, March 5 2014," the statement said.

Kuwait's ruling emir could help soothe the rift, the Kuwaiti parliament speaker said. "We follow with concern the implications," Marzouq al-Ghanim said, according to state news agency KUNA, and he looked forward to mediation by the emir.

Qatar has played a weighty role in promoting Arab Spring protests against authoritarian rule, saying it has stood consistently with ordinary Arabs against oppression. It has sought to elevate its international profile through a global investment campaign, the 1990s launch of al Jazeera, and its successful bid to host the 2022 soccer World Cup tournament.

A source close to the Saudi government said pressure on Qatar would continue until it made tangible steps to change its policies. "They have to divert their position on many issues and we are waiting for real signs of this, not just talk."

A Gulf diplomatic source said: "We expect Qatar to react to what just happened and withdraw from the policies and ideas that have isolated it as a country. As people we are very brotherly to one another and we don't want things to escalate."