Syrian tanks firing shells and machineguns stormed the city of Hama on Sunday, killing scores in a move to crush demonstrations against President Bashar al-Assad's rule, residents and activists said. 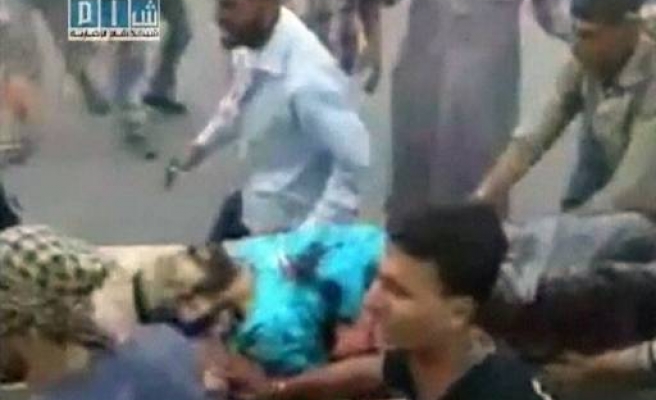 Syrian tanks firing shells and machineguns stormed the city of Hama on Sunday, killing scores in a move to crush demonstrations against President Bashar al-Assad's rule, residents and activists said.

Assad's forces began their assault on the city, scene of a 1982 massacre, at dawn after besieging it for nearly a month. The official state news agency said scores of were on rooftops and "shooting intensively to terrorize citizens".

But residents said tanks and snipers were shooting at unarmed residential districts, where inhabitants had set up makeshift road blocks to try and stop their advance, and that an irregular Alawite militia loyal to Assad, known as 'shabbiha' accompanied the invading forces in buses.

Hama has particular significance for the anti-Assad movement as Assad's father, the late President Hafez al-Assad, sent in troops to crush an Islamist-led uprising there in 1982, razing whole neighbourhoods and killing up to 30,000 people in the bloodiest episode of Syria's modern history.

The president and the ruling family are from the minority Alawite sect, which has dominated Syria, a majority Sunni country, since the ruling Baath Party took power in a 1963 coup.

In 2000, Assad succeeded his late father, keeping the autocratic political system he inherited intact, while expanding the share of the Assad family of the economy through monopolies awarded to relatives and friends.

The National Organisation for Human Rights, a Syrian activist group, said 121 people were killed in Hama and three other centres across the country on Sunday.

The activist group reported 95 deaths in Hama, after tanks and soldiers stormed the city and said that 26 anti-government protesters died in Deir ez-Zor, Harak and Al Bukamal.

Citing hospital officials, the Syrian Observatory for Human Rights said the death toll in Hama was likely to rise, with dozens badly wounded in the attack.

A doctor, who did not want to be further identified for fear of arrest, told Reuters that most bodies were taken to the city's Badr, al-Horani and Hikmeh hospitals.

Scores of people were wounded and blood for transfusions was in short supply, he said by telephone from the city, which has a population of around 700,000.

"Tanks are attacking from four directions. They are firing their heavy machineguns randomly and overrunning makeshift road blocks erected by the inhabitants," the doctor said, the sound of machinegun fire crackling in the background.

"Armed groups in Hama set police stations on fire, vandalised public and private property, set roadblocks and barricades and burned tyres at the entrance of the city and in its streets."

Yasser Saadeldine, a Syrian Islamist living in exile in Qatar, said the attack of Hama marks a significant escalation in Assad's reliance on the military to try and crush the uprising.

"Assad has chosen to dig deeper into the security option, especially with a retreat in the tough international and regional stances against the regime," Saadedine told Reuters.

"Assad is trying to resolve the matter before Ramadan when every daily fasting prayer threatens to become another Friday. But he is pouring oil on a burning fire and now the Hama countryside is rising in revolt ," said Saadedine, in reference the Muslim holy month, which begins in Syria on Monday.

Another resident said that in Sunday's assault, bodies were lying uncollected in the streets and so the death toll would rise. Army snipers had climbed onto the roofs of the state-owned electricity company and the main prison, he said.

Tank shells were falling at the rate of four a minute in and around northern Hama, residents said, and electricity and water supplies to the main neighbourhoods had been cut, a tactic used regularly by the military when storming towns to crush protests.

Assad is trying to end an uprising against his 11-year rule that broke out in March, inspired by the Arab Spring revolutions in Tunisia and Egypt, and has spread across the country.

Syrian authorities have expelled most independent journalists, making it difficult to verify reports of violence.

In southern Syria, rights campaigners said security forces killed three civilians when they stormed houses in the town of al-Hirak, 35 km (20 miles) northeast of the city of Deraa.

Local activists and the Syrian Observatory for Human Rights added dozens of people, including three women, were arrested.

The Observatory said troops also arrested more than 100 people in the Damascus suburb of Mouadamiyah. A Western diplomat said he saw several tanks enter the suburb.

"The regime thinks it can scare people before Ramadan and make them stay home. But especially the people of Hama have shown themselves to be resilient," the diplomat said.

Turkish Prime Minister Tayyip Erdogan, once one of Assad's main allies, said in May "we do not want to see another Hama massacre", and warned the 45-year-old president that it would be hard to contain the consequences if it were repeated.

The Syrian leadership blames "armed terrorist groups" for most killings during the revolt, saying that more than 500 soldiers and security personnel have been killed.

An activist group, Avaaz, said in a report last week that Syrian security forces had killed 1,634 people in the course of their crackdown, while at least 2,918 had disappeared. A further 26,000 had been arrested, many of whom were beaten and tortured, and 12,617 remained in detention, it said.

In the east of the country, Syrian forces began an assault two days ago in a tribal oil-producing province on the border with Iraq's Sunni heartland. Residents said at least 11 civilians were killed in the eastern provincial capital of Deir al-Zor on Saturday and Sunday.

"There are army tanks in the streets, but most of the deaths have been at the hands of Military Intelligence," one of the residents told Reuters.

The Syrian Revolution Coordination Union, said 57 soldiers in Deir al-Zor, including two lieutenants and a captain, had defected to the demonstrators. It said residents had formed local committees and erected makeshift barriers to try to halt the advance of tanks and armoured vehicles inside the city.

"More tank columns are heading to Deir al-Zor. By using heavy weapons, security forces are waging war against their own people," the group said in a statement.

It added: "An exchange of fire occurred. The police forces confronted these armed groups and are still chasing them ... The inhabitants of Deir al-Zor have expressed their rejection of these actions which are bad for the homeland."