Security sources said Sheikh Khaled al-Baradei, 28, a Sunni, was shot fatally in the neck by a sniper in the early hours on Friday, and two other identified men were killed. 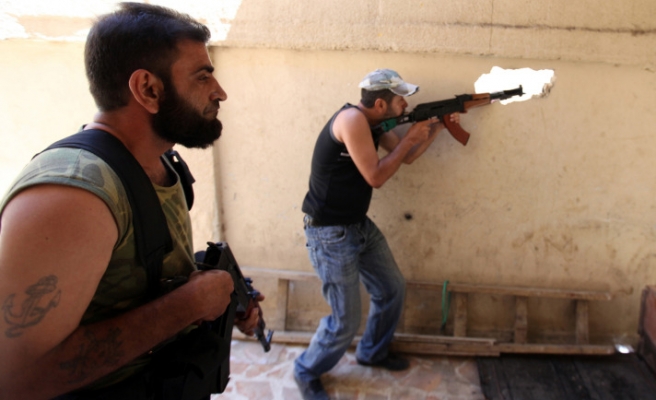 At least three people including an Sunni commander were killed on Friday in a fifth day of sporadic sectarian fighting in Lebanon's northern city of Tripoli triggered by the conflict in neighbouring Syria.

A Lebanese security source said the situation in Tripoli, where clashes between Sunni Muslims and Alawites have killed 16 people since Monday, was "alarming and dangerous .. It is very likely that it will escalate this time".

Security sources said Sheikh Khaled al-Baradei, 28, a Sunni, was shot fatally in the neck by a sniper in the early hours on Friday, and two other identified men were killed.

The first security source said at least seven Alawite-owned shops in mainly Sunni districts had been torched. He said 41 people were wounded, including soldiers.

The Lebanese army deployed troops and tanks on the streets on Thursday morning to calm the streets and clashes appeared to die down in most areas before flaring again overnight.

Sunni Muslims in Syria form the backbone of the 17-month-old uprising against President Bashar al-Assad, part of the Alawite minority who are an offshoot of Shi'ite Islam. Tripoli's fighting has been along the same sectarian lines.

Gunmen from Tripoli's Alawite-populated Jabal Mohsen district have engaged in on-off skirmishes over the past week with Sunni fighters in the Bab al-Tabbaneh area.

The Lebanese government has distanced itself from the unrest in Syria for fear it might spill over because Lebanon's sectarian divisions are similar and Syria has powerful allies as well as enemies in its smaller neighbour.

Residents say political leaders in Tripoli agreed a ceasefire on Wednesday but sniping by both sides has continued.