A bomber drove a car laden with explosives into a hospital used as a base by Houthi movement, killing at least 15 people, and five more died in an ambush in the south of the country. 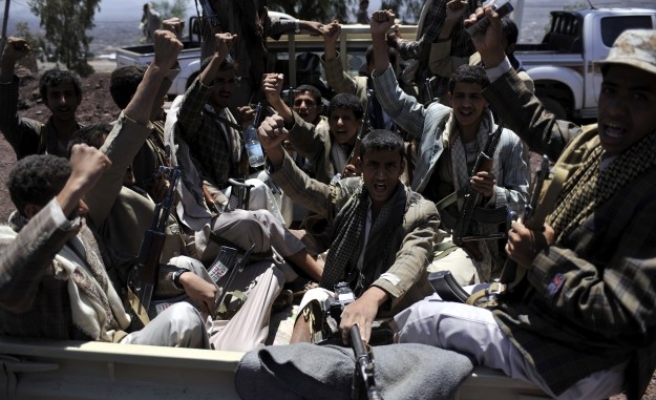 Shiite Houthi militants were on Sunday the target of three separate attacks in the Yemeni capital Sanaa, the eastern province of Maarib and the central province of Al-Bayda'.

Ansar Al-Sharia claimed responsibility for two of the attacks.

It said in a message on Twitter that it had killed six Houthi militants and injured scores of others in these attacks.

The group said it had killed the six Houthi militants in the central province of Al-Bayda'.

It added that it had ambushed a car carrying six Houthis who were on their way to Rada'a, the provincial capital of Al-Bayda'.

They added that the attackers had also burned down the car after killing all passengers inside.

Earlier in the day, two people were injured when a roadside explosive charge went off near a Houthi checkpoint in northern Sanaa, eyewitnesses told Anadolu Agency.

"The charge went off as a car passed, leaving two passengers injured," said one witness, noting that the two victims were taken to a nearby hospital for treatment.

Ansar Al-Sharia claimed responsibility earlier in the day for a car bombing, targeting Houthi militants in Majzar, a district of the eastern Maarib province.

The group said in a Twitter message that it had carried out a car bombing that had left several Houthis dead and injured.

A booby-trapped car exploded immediately after entering the July 7 Hospital, which had been occupied by Houthi militants and turned into a military garrison.

Ambulances and an armored vehicle were seen taking the victims to Baraqish, an area controlled by Houthis in the northern Al-Jawf province.

The two attacks came only one week after the Shiite militants had taken control of the capital Sanaa.

Sanaa fell in the hands of the Houthis after almost three weeks of protests and confrontations with army troops and policemen.

A week ago, Yemeni President Abd Rabbuh Mansour Hadi – faced with massive pro-Houthi demonstrations that paralyzed the capital – signed a deal with the Houthi leadership aimed at ending the weeks-long political standoff.

Saudi Foreign Minister Prince Saud al-Faisal told the U.N. General Assembly on Sunday that the situation in Yemen posed a threat to international security, and said the agreement to form a new government had been wrecked by the Houthis' failure to give up control of the capital.

The Houthis captured Sanaa after overrunning an army brigade affiliated to the Islah party, making them effectively the power brokers in the country.

Their Zaydi Shi'ite sect is related to, but separate from the sect the rules Iran. They make up 30 percent of Yemen's population of 25 million and ruled a kingdom there for 1,000 years. But they have complained of being marginalised since their last king in Sanaa was overthrown in a 1962 revolution.