Hospitals and makeshift clinics in rebel-held areas in the east of the city were filling up with casualties from a week of fighting in Aleppo. 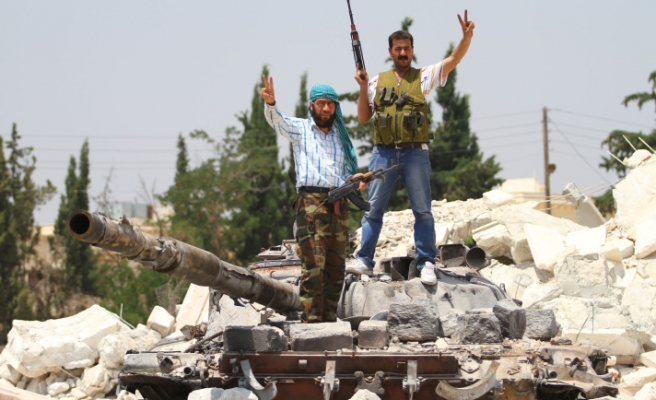 Artillery and mortar fire reverberated across Aleppo early on Monday and a military helicopter clattered towards a district that the Syrian army said it had recaptured from rebels in battles for control of Syria's biggest city.

Hospitals and makeshift clinics in rebel-held areas in the east of the city were filling up with casualties from a week of fighting in Aleppo, an commercial hub that had previously stayed out of a 16-month-old revolt against President Bashar al-Assad.

"Some days we get around 30, 40 people, not including the bodies," said a young medic in one clinic. "A few days ago we got 30 injured and maybe 20 corpses, but half of those bodies were ripped to pieces. We can't figure out who they are."

The opposition Syrian Observatory for Human Rights said 18 people were killed in the Aleppo area on Sunday out of more than 150 people, two thirds of them civilians, slain across Syria.

Outgunned rebel fighters, patrolling in flat-bed trucks flying green-white-and-black "independence" flags, said they were holding out in the Salaheddine quarter despite a battering by the army's heavy weapons and helicopter gunships.

However, the government said it had pushed them out of Salaheddine, the focus of fighting in the southwest of the city.

"Complete control of Salaheddine has been (won back) from those mercenary gunmen," an unidentified military officer told Syrian state television late on Sunday. "In a few days safety and security will return to the city of Aleppo."

The army's assault on Salaheddine echoed its tactics in Damascus earlier this month when it used its overwhelming firepower to mop up rebel fighters district by district.

Assad's forces are determined not to let go of Aleppo, where defeat would be a serious strategic and psychological blow. But military experts believe the rebels are too lightly armed and poorly commanded to overcome the army, whose artillery pounds the city at will and whose gunships control the skies.

Reuters journalists in Aleppo were not able to approach Salaheddine after nightfall on Sunday to verify who controlled it. The Syrian Observatory said fighting was still in progress.

Warfare has stilled the usual commercial bustle in this city of 2.5 million. Vegetable markets are open but few people are buying. Instead, crowds of sweating men and women wait nearly three hours to buy limited amounts of heavily subsidised bread.

Rebel fighters, many of them from rural areas near Aleppo, still remain in control of swathes of the city, moving around those areas armed with assault rifles and dressed in items of camouflage clothing in an edgy show of confidence.

They were emboldened to strike at Aleppo and Damascus after a July 18 explosion that killed four of Assad's top security officials in a damaging blow at the president's inner circle.

Government forces have reimposed their grip on the capital and are eager not to allow Aleppo to slip into the hands of the rebel Free Syrian Army, whose checkpoints in some districts fly the black and white banners.

The deputy police chief of Syria's western Latakia city defected and fled to Turkey overnight with 11 other Syrian officers, a Turkish official said on Monday, adding that another 600 Syrians had arrived in the last 24 hours, bringing the total number of Syrian refugees in Turkey to around 43,500.

The United Nations humanitarian chief said 200,000 people had fled Aleppo, only 50 km (30 miles) from the Turkish border, in two days. It was not clear how this estimate had been reached given the difficulties of assessing relief needs in war zones.

"Many people have sought temporary shelter in schools and other public buildings in safer areas. They urgently need food, mattresses and blankets, hygiene supplies and drinking water," said Valerie Amos, the U.N. official.

Cars entering one Aleppo district came under fire from snipers on Sunday and a Reuters photographer saw three bodies lying in the street. Unable to move them to hospital for fear of shelling, residents had placed frozen water bottles on two of the corpses to slow their decomposition in the baking heat.

A charred tank lay in the street. Another had been captured and covered in tarpaulin. Burnt cars could be seen elsewhere, some marked "shabbiha" - a reference to pro-Assad militiamen.

Near the centre, most shops were closed, some with "Strike" painted on the shutters. Only a bakery selling subsidised bread was open, with a queue stretching around the block.

Syria's foreign minister also declared victory on Sunday in the battle for Damascus.

"Today I tell you, Syria is stronger ... In less than a week they were defeated (in Damascus) and the battle failed," Walid Moualem said on a visit to Iran, Assad's closest ally. "So they moved on to Aleppo and I assure you, their plots will fail."

Assad's ruling system is dominated by his minority Alawite sect, an offshoot of Shi'ite Islam, while his opponents are mostly from Syria's Sunni Muslim majority.

The sectarian element in the conflict has raised fears that it could inflame Sunni-Shi'ite tensions elsewhere, particularly in Iraq, Lebanon, Bahrain and Saudi Arabia.