For past three days, Houthis have been carrying out an unprecedented level of shelling on residential neighborhoods in Taiz 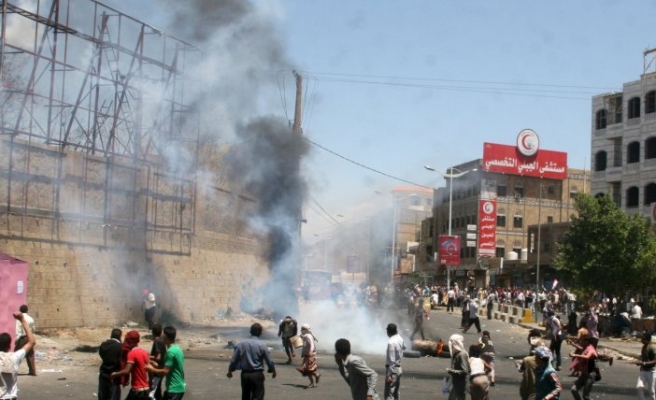 Dozens of Yemenis were killed and injured Thursday in Taiz city by Houthi shelling against residential neighborhoods.

A medical source said that the death toll in Taiz stood at 23 civilians, including 13 children.

Forty other civilians were injured in the bombing, some of them in seriously, the source added.

According to residents, some of the mortar and tank shells hit Shib Sleyt in Osifra, a residential neighborhood that has no military presence from forces loyal to the country’s elected President Abd Rabbuh Mansour Hadi.

Some of the artillery rounds hit a group of children who were playing in front of their homes, just before sunset.

Local residents said that other shells fired by Houthis, from their position in al-Hawban area, east of Taiz, targeted Osifra power plant, which went up in flames.

"The shells showered Ammar bin Yasser district, and smoke plumes were seen rising from some of the houses," the local source said.

For the past three days, the Houthis have been carrying out an unprecedented level of shelling on residential neighborhoods in Taiz, especially in areas that they have been pushed back from by the local resistance groups, which recently took back 95 percent of the city from Houthi forces.

The Houthis are currently stationed on the eastern side of the city after having been pushed out of the central regions.

The local eyewitnesses said that the six air raids targeted Salah, which has turned into a Houthi military base, but some of the rockets missed their targets and hit residential houses, killing dozens of civilians.

"The bombings killed 32 civilians and wounded 60 others," according to September Mobile, a government news service that has been seized by the Houthis.

It was not possible to confrim the figures quoted by the Houthis, but residents near the site confirmed the collapse of at least two houses as well as a number of civilian casualties, while relief work in search of survivors is still ongoing.