Despite writing a thesis defending democracy during his an internship at the Military Academy in the United States in 2006, just seven years later General Sisi saw no harm in overthrowing elected President Morsi. 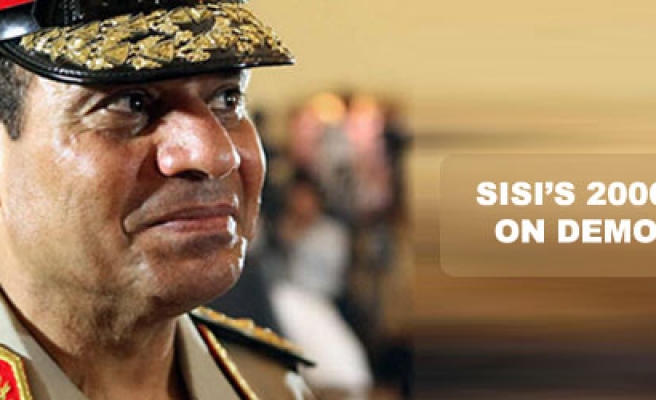 The thesis written by General Abdulfettah Sisi, who overthrew the democratic government in Egypt, during an internship at the United States Military Academy in Pennsylvania in 2006 has emerged. The non-governmental Judicial Watch organization, which keeps track of the US administrations moves, has released the 11-page thesis belonging to Defense Minister and Chief of Staff Sisi. While the thesis titled "Democracy in the Middle East" written by Sisi, who graduated from the Military Academy in 2006, does not specifically mention the Egypt ruled by Hosni Mubarak, it does provide information about the person of the new leader, who overthrew the first elected president of through a military coup and had leaders of the Muslim Brotherhood in Egypt jailed. Sisi, who was a brigadier general at the time he wrote the thesis, notes that religion played a very important role during the early periods of American democracy and helped build the values of the American nation. He argues that the case is no different in the Middle East, so it would make sense to predict the formation of a democratic government on the basis of Islamic values. He casts the ideal as being legislative, executive and judicial Powers which make decisions while taking Islamic beliefs into account.

WILL THE WEST BE ACCEPTING?

Noting that democracy in the Middle East may bear little resemblance to Western examples, Sisi’s thesis suggests that the biggest challenge will be whether or not the world accepts a democracy established in the Middle East based on Islamic beliefs. Sisi wrote that a secular democracy which is respectful of the Islamic beliefs of the people may also be possible. Sisi, who was appointed as Chief of Staff just a year ago, was an officer respected by his colleagues, and trained in the United Kingdom and United States. After graduating from the Nasser Military Academy in 1977, Sisi carried out important roles in his career, first in the infantry and then military intelligence. Sisi's successful military career and his piety caught the attention of newly elected President Morsi in 2012. Due to his wife being an exception by wearing a headscarf and his father’s nephew being a Muslim Brotherhood member, Sisi was viewed by the new administration as an ideal candidate for the reform of the Egyptian military. However, after just one year the same officer enabled the military overthrow of Morsi and took over the government. This was seen as a betrayal of Sisi's values.

Sisi’s thesis also addresses the Western reaction to Hamas, arguing that the Western attitude toward Middle Eastern democracy must “[allow] some factions that may be considered radical particularly if they are supported by a majority through a legitimate vote. The world cannot demand democracy in the Middle East, yet denounce what it looks like because a less than pro-Western party legitimately assumes office.”

THE STANCE OF THE MILITARY AND POLICE

When looked at from the current context, the expressions used in Sisi's thesis are a warning for today. Sisi, who was critical of religious leaders being imprisoned in March 2006 often without trials, has turned a blind eye since July 3 to the killing of more than 400 Morsi supporters and the incarceration of hundreds of Muslim Brotherhood representatives. Former President of the Mursi meanwhile is being held captive without a court order at an undisclosed location. Sisi, who wrote in his thesis that dictators in the area are anxious about elections, now argues that the region is not ready for democratic elections. The most important warning in his thesis is the passage on which he explains that security forces have not developed a culture of accepting multi-party elections. He notes that the most important concerns when the political system in the Muslim region is liberalized will be the stance of security forces since security forces are loyal to the ruling party, and not the public. He cautions that that is why there can be no assurance of whether the police and soldiers will respect a new administration when democracy arrives.

In her article published in the Foreign Policy journal, Nobel laureate Yemeni human rights activist Tawwakol Karman likened Egypt’s first elected president Mohamed Morsi to legendary South African leader Nelson Mandela. Karman wrote, “There are limited options for those of us who care about Egypt's future: We can either side with civil values and democracy, or with military rule, tyranny, and coercion.” Meanwhile the Muslim Brotherhood (Ikhwan) organization in Egypt refuted reports in the media which claim that the Brotherhood has reached an agreement with the military to end anti-coup demonstrations in exchange for the release of some of its leaders and not disbanding of the Freedom and Justice Party.

SECURITY FORCES TO INTERVENE IN SIT-INS

A propoganda to get favor to Sisi has started. This title is also one example

Where can "we the people" find this 2006 thesis so we can judge for ourselves?