"You will not intimidate the people or hijack the revolution," the Brotherhood's al-Erian said. "Military rule is not coming back; Egypt will move forward to build a free, independent nation." 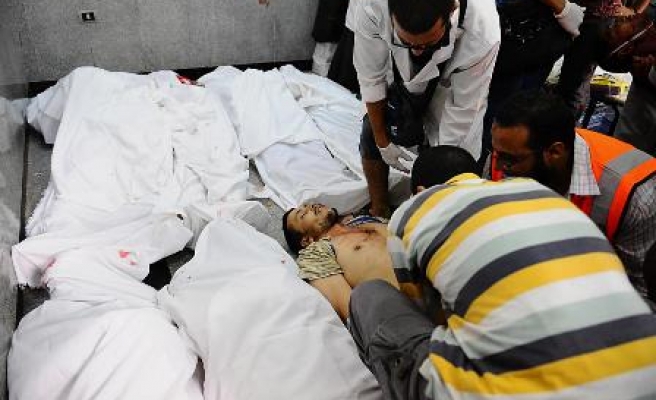 The Muslim Brotherhood said army chief and Defense Minister Gen Abel Fattah al-Sisi had saluted supporters who took to the streets Friday in response to his call for protest, while delivering "a bone-crushing message" to supporters of ousted President Mohamed Morsi.

"Al-Sisi ignored all the (pro-Morsi) protests across the country on Friday and only saw his supporters in Tahrir Square and the Ittihadiya presidential palace," group spokesperson Ahmed Aref told the Anadolu Agency.

"Then he began his massacre," he added.

According to medics at a field hospital in Rabaa al-Adawiya Square, the site of a month-long pro-Morsi sit-in, at least 200 people were killed and 4,500 injured in the early hours of Saturday in attacks by security forces on Morsi supporters.

The Health Ministry, meanwhile, put the death toll at only 29.

"This bone-shattering message will not intimidate the Egyptian people who took to the streets in the millions," Aref said, referring to mass Friday protests demanding Morsi's reinstatement.

An Egyptian army spokesman posted a brief statement on his official Facebook page "thanking" the Egyptian people who assembled in Tahrir Square and the Ittihadiya presidential palace yesterday to show their support for the military.

"To the great Egyptian people: salutations and thanks from your armed forces," the statement read. It was accompanied by a picture of al-Sisi giving a military salute while looking at images of Tahrir teeming with protesters.

Aref, for his part, refuted the ministry's story.

"Today, our martyrs in Alexandria were killed at a mosque, a house of God," he said. "And in Cairo, they were killed based on the lie that they tried to block a bridge late at night."

At least eight people were killed and scores injured in clashes on Friday between Morsi's supporters and opponents in the coastal city of Alexandria.

Mohamed al-Beltagi, a senior Brotherhood leader, insisted that protesters would continue their sit-in until their demands were met.

"We will not go anywhere until the reinstatement of the elected president, the parliament and the constitution, and the prosecution of the killers," he told the Anadolu Agency.

"We see snipers around us everywhere, but we will maintain our position peacefully," he added.

"The responsibility falls on the leader of the coup who made death threats and asked for a 'mandate' from his supporters," al-Erian said in statements carried by the website of the Brotherhood's Freedom and Justice Party, in reference to al-Sisi's call for Friday's pro-army protests.

"You will not intimidate the people or hijack the revolution," al-Erian said. "Military rule is not coming back; Egypt will move forward to build a free, independent nation."