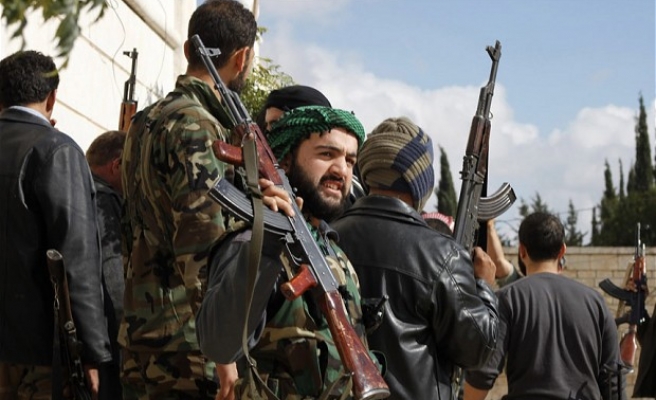 While the main opposition coalition welcomed the strikes, several commanders contacted by Reuters said the campaign against ISIL could backfire if it allowed forces loyal to Assad to fill the vacuum on the ground.

"There is a fear that the regime will exploit a military vacuum in areas of ISIL control to realise military advances," a commander in western Syria said via online message. "This will make the alliance appear to the people as the saviour of the Assad regime."

The commander, who is linked to the main rebel Free Syrian Army, said that if pro-Assad forces ended up benefitting from the strikes it could even increase the popularity of ISIL.

Part of U.S. President Barack Obama's strategy against ISIL depends on equipping and training Syria's more moderate rebels to strengthen the opposition as the best counterweight.

But the rebels, who have found themselves fighting both the ISIL and Syrian government forces, have said they urgently need heavy weaponry rather than the training and the type of light arms they expect to get.

A grouping in northern Syria of "Free Syrian Army" (FSA) fighters - as the troops affiliated with the main Western-backed opposition coalition are called - said that while it supported attacks on ISIL, the full solution meant striking at Assad, "the source of terrorism."

"The regime plans to exploit the current situation, by taking the opportunity to massacre civilians and blame their deaths on coalition air strikes," the statement from colonel Hassan Hamadi said.

Hamadi, speaking on behalf of a grouping of northern rebel forces known as the FSA Fifth Legion, urged coordination between the FSA and U.S.-led forces to avoid civilian casualties and to allow rebels to secure areas vacated by ISIL.

Rebel commanders also voiced concerns that the overnight raids in the northern Idlib and Aleppo provinces, which have targeted al Qaeda-linked Nusra Front, could target other brigades which have fought against Assad forces.

"It is worrying that the declared target is (ISIL) but that the actual execution targets some FSA brigades," said FSA commander Ahmad Rahal, referring to some groups fighting alongside the FSA.

In a statement earlier on Tuesday, Syria's Western-backed political opposition welcomed the raids, saying they would bolster its struggle against Assad.

"This will make us stronger in the fight against Assad ... The campaign should continue until the ISIL is completely eradicated from Syrian lands," Monzer Akbik, special envoy to the president of Syria's opposition National Coalition, told Reuters.