Starving rebels turn over weapons for food in Syria

Thousands of residents of besieged Yarmouk refugee camp have started turning over weapons to government forces in exchange for food and medical supplies. 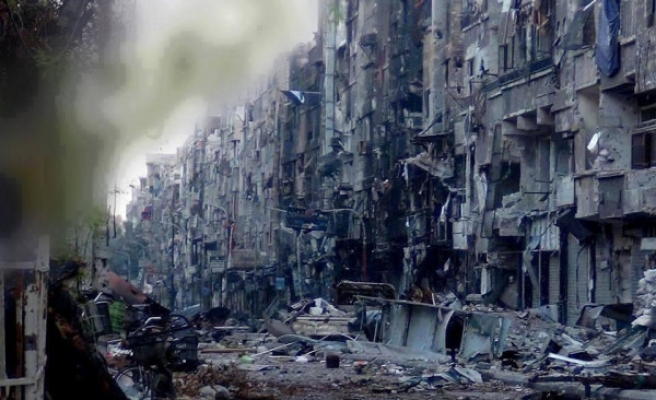 Rebels in beseiged neighborhoods of Syria's capital, Damascus, have started turning over weapons to government forces in exchange for food and medical supplies, Allvoices writer Nathan Salant said in a report.

Local cease-fire agreements have been reached in at least four neighborhoods in a program the government calls "national reconciliation” to end the country's 3-year-old civil war.

But antigovernment activists say the regime of Syrian President Bashar al-Assad is trying to put a positive face on efforts to starve Syrian residents into submission, according to the Associated Press.

"They want us to submit or be hungry," said Damascus activist Abu Akram.

Terms have varied from neighborhood to neighborhood, according to the report, but rebels generally have agreed to a cease-fire and surrender heavy weapons.

Rebel gunmen have been forced to give themselves up in some cases, the report said, and some have not returned from government custody.

Most of the agreements have been weighted toward the government, such as the deal that allowed food and supplies into Moadamiyeh.

The agreement does not guarantee that supplies will be allowed into the area and government forces occasionally block them as punishment.

"The siege wasn't broken, they still have their tanks and troops and checkpoints," said Qusai Zakarya, an activist from Moadamiyeh who fled to Beirut after being held by authorities for 17 days.

In Yarmouk, small shipments of aid have started getting through seige lines but people are starving.

Filippo Grandi, who heads a UN relief agency that supports Palestinian refugees, said he visited the camp this week and was shocked to see so many emaciated residents emerging from bombed-out buildings.

"They can hardly speak," he said.

Syrian war is utter bloodshed; it must stop; Sufi Maulanas of Syria should visit the mausoleum of Sheikh-e-Akbar Ibne Arabi and beseech Allah's forgiveness through the intercession of the soul of the Sheikh. For me also raise your hands at the entrance of the mazar. thanks