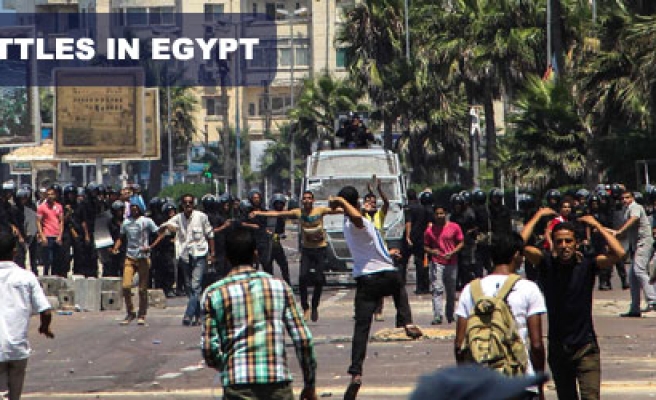 According to medics and eyewitnesses, at least 163 people were killed and thousands injured during the dispersal of two protest sites in Rabaa al-Adawiya Square and Nahda Square.

The Egyptian Ambulance Organization, however, has put the death toll in the two squares at 23.

Following the dispersal, pro-Morsi demonstrators clashed with security forces in the northern city of Alexandria.

According to eyewitnesses, Morsi supporters used firearms and hurled stones during the clashes, which left scores of people injured.

Medics said 54 police personnel had been injured in the clashes.

One person was killed and 11 injured in a similar melee in the Upper Egyptian city of Assiut.

Scores of people were also wounded in violent confrontations between angry protesters and security forces in the Upper Egyptian province of Minya.

At least four people were also killed and 40 injured in clashes between police and Morsi supporters in the canal city of Ismailia.

An army officer and a soldier were killed earlier the same day when unknown assailants attacked an army vehicle in the canal city, a security source told the Anadolu Agency.

Another five people were killed in clashes between Morsi supporters and security forces in Cairo's Moustafa Mahmoud Square.

Scores of people were also injured in clashes between pro- and anti-Morsi demonstrators in the southern city of Luxor.

Further casualties were reported in clashes between security forces and pro-Morsi demonstrators in the Nile Delta Daqahliya province.

In Suez, one person was killed and 30 injured in violent confrontations between Morsi supporters and security forces.