Security services said the bomber was a Saudi national and that a second suspected Saudi militant, who was wounded in the blast, was arrested at the scene. 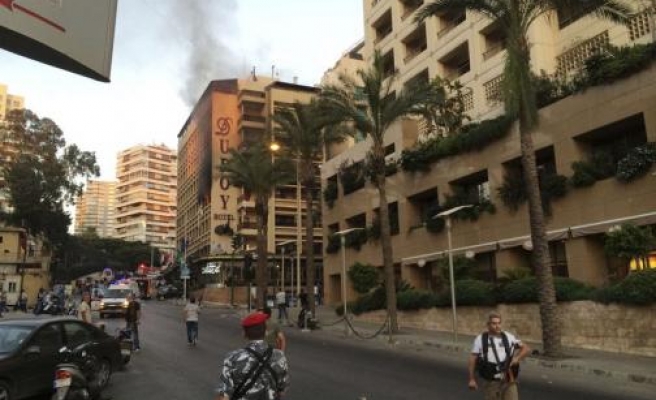 A suicide bomber wounded three security officers in a hotel close to the Saudi Arabian embassy in Beirut on Wednesday, Lebanon's interior minister said, the third blast in the country in less than a week.

Security services said the bomber was a Saudi national and that a second suspected Saudi militant, who was wounded in the blast, was arrested at the scene. The embassy was not damaged.

"The suicide bomber wanted to blow himself up at another place and security measures were taken to prevent the suicide bomber from reaching his target," Interior Minister Nouhad al-Mashnouq told Lebanese television.

It was not clear whether the bomber was linked to any particular group.

The bomber blew himself up after security officers raided the Duroy hotel, some 20 metres (yards) from the embassy in the seaside district of Raouche, security sources said.

"The explosion happened after the security forces raided the building - like two minutes after - and the fire erupted," said Ahmad, a resident at the scene.

Beirut's streets have been busy in the evenings with people watching the World Cup at cafes in the warm summer weather.

Police had been monitoring a group of men who had booked into the four-star Duroy hotel several days ago and the two men linked to the bombing had arrived recently, the sources said.

The Saudi embassy had identified the bomber and was coordinating with Lebanese investigators, Lebanon's national news agency said, citing a source close to the embassy. No one at the embassy was immediately available for comment.

Earlier on Wednesday the Lebanese army said its intelligence unit had arrested five men suspected of planning to kill senior security officials in the north of the country.

It said the men were part of a "terrorist cell" in Qalamoun, near the Mediterranean city of Tripoli. The army was still trying to track down the remaining cell members, it said.