"The world must hear the cry of the people, stop the violence, put an end to this carnage, halt the destruction of the great country of Syria," Pinheiro said. "The war remains deadlocked as both sides labor under the illusion that a military victory is possible." 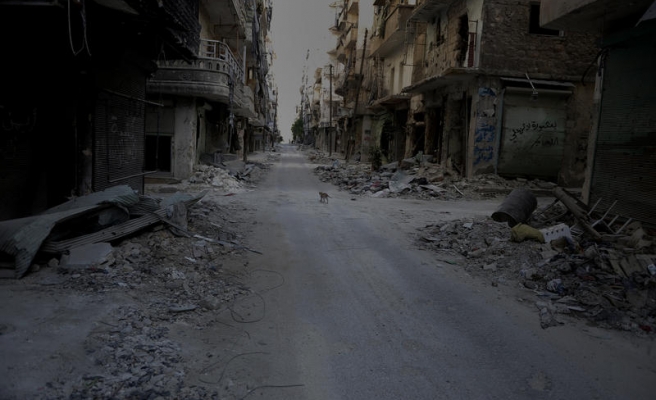 Paulo Sérgio Pinheiro, the Chair of the Independent International Commission of Inquiry, said on Monday Syria was in 'free fall' and had become a battlefield, and called on the internaitonal community to act 'decisively' to bring the war to an end.

Paulo Pinheiro told the UN General Assembly that massacres and other unlawful killings were perpetrated with impunity, mostly by pro-government forces and some by anti-government armed groups.

He urged the international community to demand a diplomatic solution to the more than three-year old conflict which has killed more than 100 thousand people and made over one million Syrians flee to neighboring countries.

"The world must hear the cry of the people, stop the violence, put an end to this carnage, halt the destruction of the great country of Syria," Pinheiro said. "The war remains deadlocked as both sides labor under the illusion that a military victory is possible."

4.5 million people are displaced inside Syria, 18 million remain in their homes and have become the first providers of humanitarian aid to their fellow citizens, and more than 2.5 million are unemployed and struggling to survive, Pinheiro said adding the estimated cost of the conflict to Syria's economy was between 60 to 80 billion dollars, a third of its pre-war GDP.

Pinheiro said the Assad Regime was relying on its superior weaponry and control of the skies to maintain control of major cities and lines of communications while hundreds of anti-government armed groups increased operations in the north and south.

Few of these rebel groups are able to fight across several fronts, and the majority are seriously fragmented, with fighters shifting allegiances usually to better-equipped and better-funded groups, he said.

He said both sides must stop laying siege to cities and towns and cutting off vital supplies of food, water, medicine and electricity.

"Civilians are the real victims of this prolonged war," Pinheiro said. "Crimes that shock the conscience have become a dreadful daily reality in Syria. An untold number of men and women have disappeared from checkpoints and the streets and those freed from detention "are living with the physical and mental scares of torture."

"Of extreme concern is whether both government forces and anti-government armed groups are positioning military objectives within civilian areas, exposing residents to attacks by the opposing side," he said.

Pinheiro said crimes of sexual violence, including rape, have been documented taking place at checkpoints, during house searches and in detention centers.