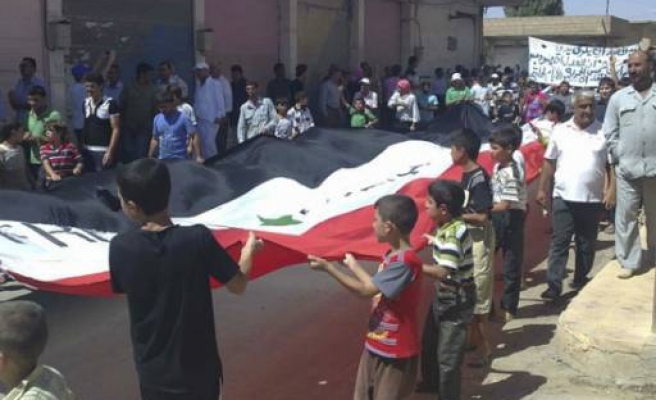 Forces loyal to Syrian President Bashar al-Assad fought gun battles overnight near a northeast Damascus suburb with army defectors who had refused to shoot at a pro-democracy protest, residents said on Sunday.

Five months into a popular uprising, Assad is under pressure from street protests, galvanized by the Muslim holy month of Ramadan, and from Arab foreign ministers who told Syria early on Sunday to work to end bloodshed "before it is too late".

The Arab League decided to send its Secretary-General to Damascus to push for reforms. . Turkey's president said he had lost confidence in Syria.

Dozens of soldiers defected and fled into al-Ghouta, an area of orchards and farmland, after pro-Assad forces fired at a large crowd of demonstrators near the Damascus suburb of Harasta to prevent them from marching on the capital, residents said.

"The army has been firing heavy machineguns throughout the night at al-Ghouta and they were being met with response from smaller rifles," a resident of Harasta told Reuters by phone.

It was the first reported defection around the capital, where Assad's core forces are based.

Syrian authorities have repeatedly denied any army defections have been taking place. They have expelled independent media since the uprising against Assad, from Syria's minority Alawite sect, erupted in Mach.

Activists have been reporting increasing defections among the rank-and-file army, mostly drawn from Syria's Sunni majority but dominated by an Alawite officer core effectively under the command of Assad's brother Maher.

A statement published on the Internet by the Free Officers, a group that says it represents defectors, said "large defections" occurred in Harasta and security forces and shabbiha (militiamen) loyal to Assad were chasing the defectors in the direction of the gardens and districts inside Damascus.

The statement said that a colonel in Air Force Intelligence, who had been in charge of raids and arrests by the secret police, was hit by a bullet in his head in the nearby suburb of Saqba.

The escalation came after Syria's Interior Ministry warned Damascus residents on Saturday against demonstrating after some of the most intense protests in the capital since the start of the uprising against Assad.

President Abdullah Gul of Turkey, a former ally which has become increasingly critical of Syria, said the situation had reached a point where changes would be too little too late, Turkish state-run news agency Anatolian reported.

Gul told Anatolian in an interview: "We are really very sad. Incidents are said to be 'finished' and then another 17 people are dead. How many will it be today? Clearly we have reached a point where anything would be too little too late. We have lost our confidence."

Assad's closest ally, Iran, said Damascus must listen to the "legitimate demands" of its people. But Tehran also said that any change in Syria's ruling system would be dangerous for the Middle East.

In Cairo, the Arab League said in a statement after an extraordinary meeting that it was concerned "over the dangerous developments on the Syrian arena that had caused thousands of casualties" and "stresses the importance of ending bloodshed and to resort to reason before it is too late".

It was the first official Arab League meeting on Syria since the start of the uprising, inspired by revolutions in Tunisia and Egypt that sparked unrest across the Middle East and North Africa. The foreign ministers said Syria's stability was crucial for the Arab world and the whole region.

The United Nations says 2,200 people have been killed since Assad sent in tanks and troops to crush months of street demonstrations calling for an end to his family's 41-year rule.

Syrian authorities have blamed armed "terrorist groups" for the bloodshed and say 500 police and army have been killed.

The latest demonstrations in Damascus were partly sparked by an attack on Saturday by Assad's forces on a popular cleric, Osama al-Rifai. He was treated with several stitches to his head after they stormed al-Rifai mosque complex in the Kfar Sousa district of the capital, home to the secret police headquarters, to prevent a protest from coming out of the mosque.

"Some of the 'amn' (security) went on the roof and began firing from their AK-47s to scare the crowd. Around 10 people were wounded, with two hit by bullets in the neck and chest," a cleric who lives in the area told Reuters by phone.