Rabia was still in the hands of government forces, other crossings with Iraq and Turkey have fallen in the hands of the rebels, the first time they have held sway over Syria's frontiers. 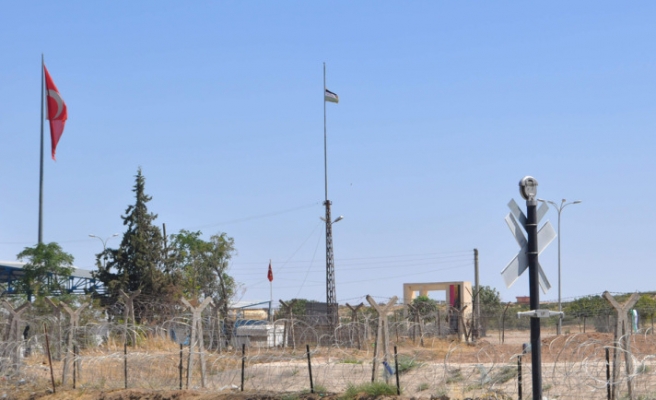 Syrian truck driver Abu Sara used to feel scared when he crossed the border into Iraq, fearing attacks in a country gripped by sectarian violence. Now, as he exits a Syria in even greater turmoil, he feels a sense of relief.

"Us drivers, we feel the danger of the road as we enter the Syrian territories, but we feel safe when we are near the crossings between the two sides," he said at the northern Iraqi border crossing in Rabia, 100 km (62 miles) west of the Iraqi city of Mosul.

Rabia was still in the hands of government forces, he said on Friday night. The Syrian flag fluttered above the border crossing and a huge mural of Hafez al-Assad, the late father of embattled Syrian President Bashar al-Assad, was on display.

Other crossings with Iraq and Turkey have fallen in the hands of the rebels, the first time they have held sway over Syria's frontiers.

On Thursday, the rebels claimed control of the Abu Kamal crossing with Iraq - one of the most important trade routes in the Middle East and the main border post on the Baghdad-Damascus highway - and of the crossings at Jarablus and Bab al-Hawa at the border with Turkey.

With the rebels making gains in the fighting, some Iraqi officials were reported as saying that the rebels had captured all four border posts with Iraq, while others said only Abu Kamal had fallen.

Abu Sara said the roads around Rabia remained dangerous. He parks his truck close to Syrian military checkpoints to feel safer, he added.

"Every day we are exposed to the danger of the road, we face bandits, not necessarily armed operations. But this indicates how fragile the security situation is in Syria - it is not able to control the roads and the thieves."

Syrian government forces pounded rebels in Damascus overnight, battling to reverse opposition gains in the aftermath of the assassination of Assad's security chiefs.

Iraq has reinforced key points along its 680 km (420 mile) desert border with Syria with troops and increased patrols, according to military officials.

At Rabia, a main crossing close to the Turkish border and northeastern tip of Syria, the frontier gates are open for eight hours a day and Iraqi guards said they had noticed an increase in the number of Iraqi families returning from Syria - though no apparent rebel offensive.

"We haven't noticed anything odd happening on the Syrian side but their customs procedures have become more complicated," Iraqi customs official Abu Ali said. "We haven't heard any shooting or any attacks on the crossing by the (rebel Syrian) Free Army."

He said bursts of gunfire could sometimes be heard during the night, but put this down to Iraqi troops firing on smugglers who have become more active, taking advantage of a worsening security situation. Syrian police still manned the land surrounding the border, he said.

The Iraqi army recently sent a regiment to reinforce security at the Rabia crossing. Officials said they had seen Syrian government troops on the other side but noticed that their numbers had dwindled as the Syrian crisis escalated.

Last week Iraq called on tens of thousands of its citizens still living in Syria to return home because of escalating violence.

"During the last few days, we started to see Iraqis returning from Syria. I saw between five and 10 Iraqi families coming back, they carry their luggage, use taxis," said Myasar al-Ahmed, owner of a small Iraqi shop in a mud hut selling engine oil at the desolate border crossing.

"Some cars coming from Syria have bullet holes," he said.

Most appear to be coming through the al-Waleed border gate, close to Rabia.

Atheel al-Nujaifi, governor of Nineveh province where Rabia is situated, said there had not been a large influx of Iraqis returning through the crossing.

"Things are going on in a normal way, I am in continuous contact with the crossing," he said, adding that the province had buses on standby to transport people returning on foot.

On both sides of the border there are villages that depend on smuggling to make ends meet, especially as conditions worsened inside Syria, locals said. There are fewer Syrian troops around, making illicit trade through illegal crossings easier.

Syrian checks at the crossing is tighter, said Muamar al-Luhaibi, owner of a travel office in Mosul.

"Syrian security forces used to have their eyes closed when searching our luggage before, but now we wait for hours."

He said he had brought 33 people into Iraq from Syria on Friday, some Iraqis fleeing violence, some coming for medical treatment and others on tourist visas.

"Sometimes we were intercepted by (Syrian) Free Army checkpoints, some of them wear military uniforms, others civilian clothes, but when they know that we are Iraqis, they allow us to pass," he said.

"Their treatment of us is good, but they ask us if there are Syrian soldiers or citizens with us."