The Syrian foreign minister made clear his government does not consider the Western-backed Syrian National Coalition and Free Syrian Army to be a credible opposition. 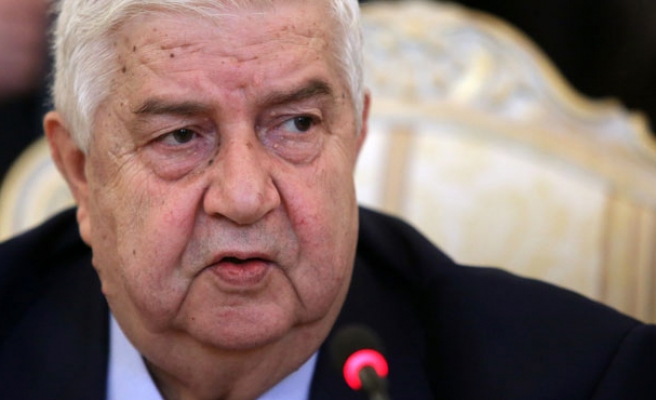 Syria stands with a worldwide effort to combat ISIL, Foreign Minister Walid al-Moualem said on Monday, in a statement to the United Nations that appeared to give tacit approval of U.S. and Arab air strikes in Syria targeting the militants.

Moualem told the United Nations General Assembly that military action to tackle ISIL, Nusra Front, and other groups should coincide with cutting off their flow of funds, weapons, fighters and training.

"It is due time to pool all our efforts against this terrorism, since imminent danger is surrounding everyone and no country is immune to it," Moualem told the annual gathering of world leaders, though he cautioned that any military action must abide by international law and respect a country's sovereignty.

The United States forewarned Syria's U.N. ambassador of its plan to begin air strikes against ISIL targets last week, but did not seek the approval of President Bashar al-Assad's government.

Moualem did not specifically condemn the air strikes, but warned that taking military action while some countries continue to support the militants could create a situation in which "the international community will not exit in decades."

"Let us simultaneously exert pressure on the countries that joined the coalition led by the United States to stop their support of armed terrorist groups," Moualem said. "Only then combating terrorism militarily becomes viable."

Damascus has repeatedly accused Qatar, Saudi Arabia and Turkey of supporting militant groups during its civil war, which has killed more than 190,000 people and was sparked by a government crackdown on peaceful pro-democracy protests in 2011.

ISIL has seized large swaths of Syria and Iraq but so far, air strikes by the United States and allies have failed to halt the militants' expansion into new territory.

President Barack Obama has acknowledged that U.S. intelligence underestimated the rise of ISIL, often referred to as ISIL or ISIS.

ISIL 'A CONSEQUENCE, NOT CAUSE'

U.N. Secretary-General Ban Ki-moon said in a report to the U.N. Security Council, obtained by Reuters on Monday, that civilians in Syria have been subjected to a "worrying increase" in violence and brutality, fueled by ISIL and other groups and the "continued actions of the Syrian government."

"It is worth remembering that ISIL is a consequence, not a cause, of the conflict in Syria. The Syrian conflict has deep political roots and needs to be resolved through negotiations," Ban wrote in his seventh monthly report to the council on the implementation of resolutions that aimed to boost aid access.

He said all parties to the conflict "have neglected, ignored and abused their international legal obligations" and despite the valiant efforts of humanitarian aid workers, Syria remains "the world's largest and most pressing humanitarian crisis."

Some 10.8 million people in Syria - half the country's population - need assistance, with 6.4 million internally displaced, while another 3 million have fled the country, according to the United Nations.

"I would like to assure Syria's readiness to exert all efforts to deliver aid from international organizations to all Syrian citizens without any discrimination wherever they are, and within the framework of respecting the national sovereignty," said Moualem, who blamed militant attacks and U.S. and European sanctions for making the situation worse.

Moualem said Assad's government is "striving for a political solution in Syria and in dialogue with all honorable national opposition members opposing terrorism in Syria, and among Syrians themselves and on Syrian territory."

The Syrian foreign minister, who is also deputy prime minister, made clear his government does not consider the Western-backed Syrian National Coalition and Free Syrian Army to be a credible opposition.

Moualem said his government was open to a political solution with "an opposition that has an impact on the Syrian territory, and has deep roots inside Syria, not in hotels and Western capitals, a national opposition that upholds fighting terrorism as its priority."

Washington and its European allies no longer recognize Assad's government as the legitimate representative of Syria's people and have said that any political transition there must involve his departure.