The destruction of 12 chemical weapons facilities in Syria has started but it is months behind the schedule due to winter storms. 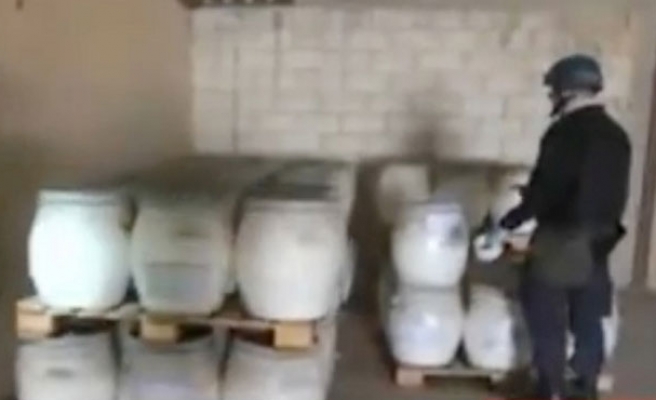 Syria has started the long-delayed destruction of a dozen underground bunkers and hangars that were used for the production and storage of chemical weapons, diplomatic sources told Reuters on Monday.

Damascus last year handed over 1,300 metric tonnes of toxic agents after joining the Organisation for the Prohibition of Chemical Weapons (OPCW), but it is months behind schedule in destroying the facilities used to make and store its deadly stockpile.

Work at a first tunnel began on Dec. 24, but was delayed by winter storms. The site will be sealed off with cement walls by the end of January, said one source in The Hague, where the global chemical weapons watchdog is based.

"The work finally began, which is good news," said another source. "There were some technical issues and the bad weather has slowed up the process."

Syria joined the OPCW after a sarin gas attack killed more than 1,000 people in the Damascus suburb of Ghouta on Aug. 21, 2013, prompting threats of military intervention by the United States, which blamed President Bashar al-Assad's government. Assad's government and rebels blamed each other.

U.S. President Barack Obama called off military action against Damascus after Syria agreed to destroy its chemical stockpiles. A year later the United States began a bombing campaign against ISIS militants in Syria with the tacit approval of Assad, which still continues.

More than 200,000 people have been killed and millions displaced in the Syrian civil war since March 2011.

The head of the OPCW is expected to provide an update on the destruction of Syria's production and storage sites, part of its obligations under OPCW membership, to foreign governments at closed door meetings in The Hague on Wednesday.

The technical details of how the seven hangars are to be demolished with explosives are still being drawn up with experts at the OPCW, the sources said. The sources declined to be identified while sharing information about the programme before it is officially made public.

Repeated delays in destroying the facilities led to protests from Washington last month, when the U.S. representative to the OPCW, Bob Mikulak, called on Syria to speed up the process under tighter outside monitoring.

An OPCW fact finding mission has been investigating the use of chlorine bombs, which have killed and injured dozens of people in Syrian villages in violation of the Chemical Weapons Convention and U.N. Security Council resolutions on Syria.

Syria denies allegations by Western governments that it withheld part of its chemical weapons stockpile.

Western diplomats said Syria has failed to provide any documentation about the chemical weapons programme, which was built up over decades and produced mass quantities of toxic nerve agents for warfare.