Whenever nadir is reached, suffering 'continues to sink deeper and deeper before our eyes', says UN aid chief 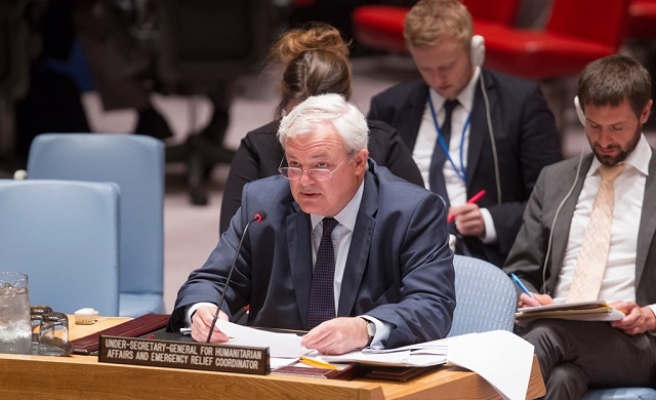 "Every time we think we have reached the nadir of human suffering in this crisis, it continues to sink deeper and deeper before our eyes," O'Brien said during his monthly briefing to the Security Council on the humanitarian situation in the war-ravaged country.

Despite this, the tragedy is "man-made" and "avoidable" through a political solution, he added. The civil war, which will enter its sixth year in March, has killed more than 250,000 victims and left 13.5 million people in dire need of humanitarian assistance, according to UN figures.

Within Syria, 6.5 million are displaced and another 4.6 million live as refugees in neighboring countries.
Talks aimed at finding a solution to the conflict are expected to begin Friday in Geneva.

O'Brien said humanitarian conditions in besieged areas -- particularly the health of civilians in the town of Madaya -- remain critical, with aid access "severely hampered by the pitiful approval rate for inter-agency convoys by the Syrian authorities".

He said a little more than 10 percent of the 113 UN requests for inter-agency aid convoys resulted in the delivery of humanitarian and life-saving assistance in 2015, with 75 percent of requests going unanswered by the Syrian government.

"On 11 January, the United Nations requested approval from the government of Syria to conduct inter-agency convoys to 46 besieged and hard-to-reach areas during the first quarter of 2016. As of 27 January, 16 days later, we have not received all of the necessary approvals for any of these requests", he said, adding that an estimated 1.7 million people could have been reached if these approvals had been granted.

O'Brien also said the situation in Madaya is "only the tip of the iceberg", with a rapidly increasing number of people "slipping out of our reach every day as the conflict intensifies and battle lines tighten".
Approximately 4.6 million residents live in hard-to-reach areas across the country, with nearly 490,000 of them in besieged locations with little or no access to basic supplies or assistance, according to UN figures.