At least 40 light tanks and armoured vehicles, and 20 buses of troops and Military Intelligence, deployed at 5:30 a.m. at the highway entrance of Rastan near Homs on Monday 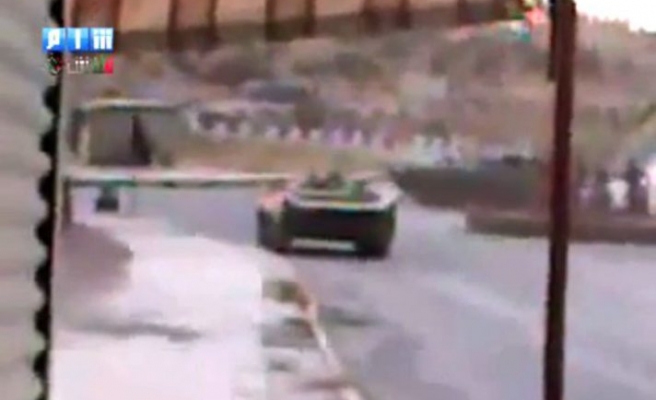 An armoured Syrian force surrounded a town near Homs on Monday after the defection of tens of soldiers from the area, activists and residents said, in the latest operation to counter dissent within the military during a five month popular uprising.

Since the demise of Muammar Gaddafi's rule over Libya, activists and residents have been reporting increasing defections among the Syrian army, as well as more intense street protests against the president.

They say there have been desertions in eastern Deir al-Zor province, northwestern Idlib province, the Homs countryside and the outskirts of Damascus, where President Bashar al-Assad's forces fought gunbattles with defectors on Sunday.

At least 40 light tanks and armoured vehicles, and 20 buses of troops and Military Intelligence, deployed at 5:30 a.m. at the highway entrance of Rastan, 20 km (12 miles) north of the city of Homs and began firing heavy machineguns at the town, two residents said.

"The tanks deployed at both banks of the highway, which remained open, and fired long bursts from their machineguns at Rastan," one of the residents, who gave his name Raed, told Reuters by phone.

He said defections began in the town when it was stormed by tanks three months ago to crush large street protests against Assad in an assault that killed dozens of civilians.

Rastan, situated at the main highway leading to Turkey, is traditionally a reservoir of recruits for the mostly Sunni rank-and-file army dominated by officers from Syria's Alawite minority sect, the same sect as Assad, and effectively commanded by his younger brother Maher.

Mustafa Tlas, who was Syria's defence minister for three decades before retiring in 2006, is from the town, among ancient farmland near the Orontes river.

President Abdullah Gul of Turkey, said on the situation had reached a point where changes would be too little too late, Turkish state-run news agency Anatolian reported on Sunday.

Gul told Anatolian in an interview: "We are really very sad. Incidents are said to be 'finished' and then another 17 people are dead. How many will it be today? Clearly we have reached a point where anything would be too little too late. We have lost our confidence."

The Arab League said it was concerned "over the dangerous developments on the Syrian arena that had caused thousands of casualties" and "stresses the importance of ending bloodshed and to resort to reason before it is too late", as well as agreeing to send its secretary-general to Syria to push for reforms.

At the Arab League meeting in Cairo, Syrian representative Youssef Ahmad said "the response of the Syrian leadership to the just popular demands has helped stop the popular movement in many cities and their decline in other areas".

He said the authorities were pursuing reforms but they will not "allow terrorism and extremism to target peaceful coexistence in Syria and the independence of its patriotic and national decisions".

Assad's forces killed at least two protesters overnight in the town of Albu Kamal on the border with Iraq in stepped up assaults on pro-democracy demonstrations, local activists said.

"A crowd streamed out from the grand mosque to the main square when they were met by bullets fired by security police snipers. Three protesters were also wounded," one activist said.

Like numerous cities and towns across Syria, Albu Kamal, on the border with Iraq's Sunni heartland has been besieged by tanks for weeks to end demonstrations demanding an end to 41 years of Assad family rule.

But protests haves been breaking out daily in the town after nightly Ramadan post break-of-fast prayers, residents said.

Citing witnesses, the Syrian Observatory for Human Rights, headed by dissident Rami Abdelrahman, said 15,000 people demonstrated overnight in the town of Saraqeb in the Idlib province that borders Turkey.

"This was the biggest demonstration in Saraqeb since the uprising. We also saw large night demonstrations in Deraa province and Damascus suburbs," Abdelrahman said from London.

"Oppressor, your reign is coming to the end. Prepare yourself for execution," chanted a crowd in the town of Hirak in the southern Hauran Plain, according to video footage distributed by residents.

North of Rastan, on the same highway leading to Turkey, two people were killed in an army assault on the town of Khan Sheikhoun,on Sunday. Two local activists, Tareq al-Nisr and Musaab Taha, were wounded, residents said.

"It was an assassination attempt. The security police and shabbiha (militiamen) are beginning to use targeted assassinations and arresting people in larger numbers," said an activist who gave his name as Abu Wael.

In Damascus, dozens of soldiers defected and fled into al-Ghouta, an area of farmland, after pro-Assad forces fired at a large crowd of demonstrators near the suburb of Harasta to prevent them from marching on the centre of the capital, residents said.

"The army has been firing heavy machineguns throughout the night at al-Ghouta and they were being met with response from smaller rifles," a resident of Harasta told Reuters by phone.

A statement published on the Internet by the Free Officers, a group that says it represents defectors, said "large defections" occurred in Harasta and security forces and shabbiha loyal to Assad were chasing the defectors.

It was the first reported defection around the capital, where Assad's core forces are based.

"The younger conscripts who defect mainly go back to their town and villages and hide. We have seen more experienced defectors fighting back in the south, in Idlib, and around Damascus," said an activist who gave his name as Abu Khaled.

Syrian authorities have repeatedly denied any army defections have been taking place. They have expelled independent media since the uprising against Assad, from Syria's minority Alawite sect, erupted in March.

The latest demonstrations in Damascus were triggered in part by an attack on Saturday by Assad's forces on a popular cleric, Osama al-Rifai. He was treated with several stitches to his head after they stormed al-Rifai mosque complex in the Kfar Sousa district of the capital, home to the secret police headquarters, to prevent a protest from coming out of the mosque.