Tens of tanks and armoured vehicles entered Rastan, a town of 40,000 on the highway to Turkey near the city of Homs. 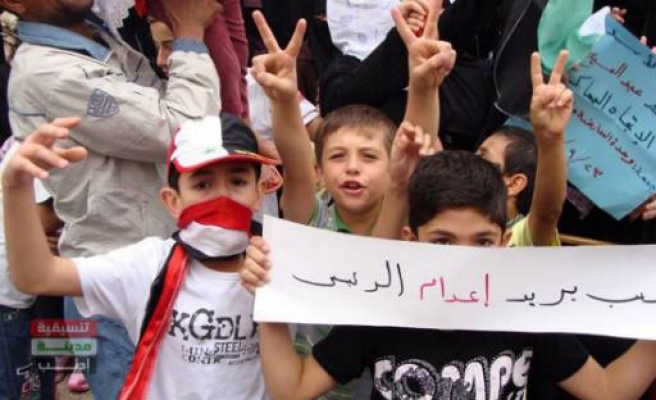 Syrian forces backed by tanks and helicopters stormed a strategic town on Tuesday after fighting with army defectors, in a major operation to subdue pro-democracy protests in the centre of the country, residents said.

Tens of tanks and armoured vehicles entered Rastan, a town of 40,000 on the highway to Turkey near the city of Homs, after pounding it overnight with heavy machineguns from tanks and attack helicopters following a two-day siege, they said.

The region, together with the province of Idlib on the border with Turkey to the northwest, has emerged as a centre of an armed resistance to the rule of President Bashar al-Assad after six months of street protests.

The popular protests are demanding an end to more than four decades of the Assad family's rule over the country of 20 million at the heart of the Middle East.

"Tanks closed in on Rastan overnight and the sound of machine guns and explosions has been non-stop. They finally entered this morning," said one of the residents, who gave his name as Abu Qassem.

Another resident said machine guns had been fired from helicopters near his house on the southern edge of Rastan, where hundreds of army defectors who took refuge in the town in the last few weeks -- including some in tanks -- had been resisting loyalist forces.

"We have not been able to go out onto the streets for two days and we have no idea of the casualties," he said.

Assad has responded to the protests by sending tanks and loyalist troops across the country in a campaign which the United Nations says has killed 2,700 people, including 100 children.

The 46-year-old president is a member of Syria's minority Alawite sect, an offshoot of Shi'ite Islam. He has ruled the mainly Sunni Muslim country -- dominating the state, the army and security apparatus -- since inheriting power from his late father Hafez al-Assad 11 years ago.

Diplomats say Assad's younger brother Maher, who effectively commands the military, is in charge of the army's attempts to subdue the uprising.

Bashar al-Assad has repeatedly said the use of his forces has been constrained and that any other country would respond to such an uprising with similar tactics. The authorities say 700 troops and police have been killed by mutineers.

Syrian Foreign Minister Walid al-Moualem said in a speech to the United Nations on Monday that member states should halt the "foreign intervention" that he described as being behind the demonstrations demanding political freedoms.

"We deeply regret the surge in the activities of armed groups in Syria, which have not waned and instead continued to spiral," Moualem told the U.N. General Assembly during its annual session in New York.

Washington, which had courted Assad before the uprising, said the intensified crackdown was beginning to spur armed resistance.

"It's not surprising, given the level of violence over the past months, that we're now seeing...members of the opposition begin to use violence against the military as an act of self-preservation," State Department spokesman Mark Toner told a news briefing.

The Syrian Observatory for Human Rights, which is based in Britain, said four soldiers were killed by military police on Monday when they tried to flee their post in Idlib province. Another seven soldiers were arrested.

Idlib and Homs have traditionally provided the bulk of the majority Sunni rank and file soldiers in the military, which is led by Alawite officers.

The two regions have been the scene of some of the biggest street protests against Assad in the last few weeks.