Babacar Gaye, the head of U.N. monitors sent to observe an abortive ceasefire declared by Annan on April 12, was expected to leave Damascus on Thursday. 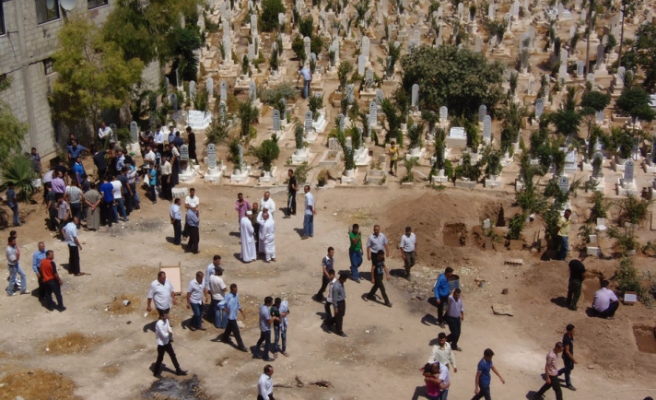 Troops and tanks swept into a restive town near Damascus on Thursday in an assault aimed at crushing opposition to President Bashar al-Assad, whose struggle for survival has dragged Syria into an increasingly bloody war.

Artillery and helicopters attacked the Sunni Muslim town of Daraya for 24 hours, killing 15 people and wounding 150, before soldiers moved in and raided houses, opposition sources said.

There was little resistance as Assad's forces pushed toward the centre of Daraya, on the southwest edge of Damascus. Armed rebels had apparently already left, activists in Damascus said.

"They are using mortar bombs to clear each sector. Then they enter it, while moving towards the centre," said Abu Zeid, an activist speaking by phone from an area near Daraya.

Other activists said the army was also bombarding parts of the town from Qasioun, a mountain overlooking Damascus, and from a Republican Guard barracks near a hilltop presidential palace.

"For about an hour we heard explosions and gunfire. It is not as bad as yesterday yet but tensions are really high," opposition activist Samir al-Shami told Reuters from Damascus.

The military had driven insurgents from most of the areas they seized in the capital after a bomb killed four top security officials on July 18, but rebels have crept back, regrouping without taking on the army in pitched battles.

Punitive military raids and summary killings appear to be one response as Assad strives to keep control of Damascus and the northern commercial hub of Aleppo, opposition sources say.

YouTube footage showed a funeral in Daraya of a mother and five children from the al-Sheikh family. Activists said the victims were killed by shellfire in the town after fleeing this week's military offensive on the Damascus suburb of Mouadamiya.

The bodies were wrapped in white shrouds, the children's faces exposed. Mourners laid green branches on the corpses and cried: "There is no god but Allah, Assad is the enemy of Allah."

Tanks and troops attacked the southwestern Damascus suburb of Mouadamiya on Monday and Tuesday, killing 86 people, half of them in cold blood, according to Assad's opponents.

It was hard to verify the assertion due to state curbs on independent media. Syrian leaders say they are fighting "armed terrorists" backed by Western and Gulf Arab nations out to topple Assad.

International diplomacy has failed to brake the conflict in Syria, which the United Nations says has cost more than 18,000 lives since a popular uprising erupted in March 2011.

More than 60 were killed across Syria on Thursday, according to the opposition Syrian Observatory for Human Rights. The toll included 48 civilians. The British-based group said 129 civilians were among 200 people killed in Syria on Wednesday.

Outgoing U.N.-Arab League envoy Kofi Annan has blamed splits in the U.N. Security Council, where Russia and China have repeatedly blocked Western efforts to ramp up pressure on Assad, for the failure of his peace mission.

Babacar Gaye, the head of U.N. monitors sent to observe an abortive ceasefire declared by Annan on April 12, was expected to leave Damascus on Thursday. The mission's mandate has expired and was not renewed due to spiralling violence.

Annan's successor, veteran Algerian diplomat Lakhdar Brahimi, was flying to New York for a week of consultations at the United Nations, his spokesman Ahmad Fawzi said.

For all Brahimi's skills, it is not clear how he can succeed where Annan failed, given the deadlock among big powers and the intractable conflict in Syria, where Assad's minority Alawite-based ruling system is pitted against mostly Sunni opponents.

The conflict in Syria, at the heart of a volatile Middle East, is already spilling over into its neighbours.

Sporadic clashes between Sunnis and Alawites erupted for a fourth day in Lebanon's northern city of Tripoli, breaching a truce agreed less than 24 hours earlier, after Sunni gunmen shot dead an Alawite man. Nine people were wounded in the fighting.

At least 13 people have been killed and more than 100 wounded in Sunni-Alawite fighting in Lebanon this week that has been fuelled by sectarian tensions in Syria.

Ankara has grown alarmed at apparent links between PKK militants fighting in southeastern Turkey and the conflict in Syria. Prime Minister Tayyip Erdogan has accused Assad of backing the outlawed Kurdistan Workers Party (PKK) militant and says Turkey's military might act to counter any threat from the PKK in Syria.

Turkish and U.S. diplomats, intelligence and military officials held talks in Ankara on Thursday expected to include a possible buffer zone in Syria and steps to stop PKK militants in the border region from exploiting the chaos.