Syrian troops raided houses in a Sunni district of the besieged port of Latakia on Wednesday, residents said. 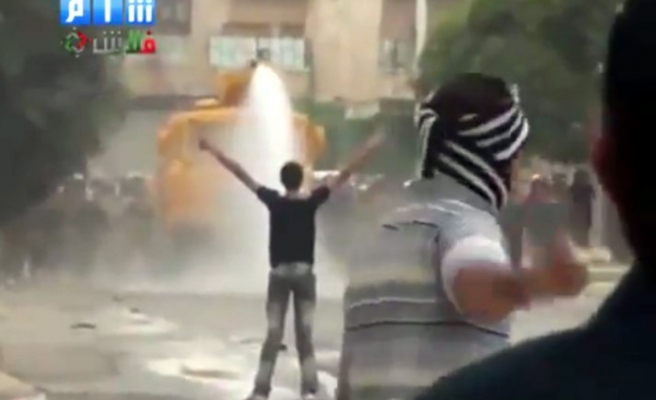 Syrian troops raided houses in a Sunni district of the besieged port of Latakia on Wednesday, residents said, arresting hundreds of people and taking them to a stadium after a four-day tank assault to crush protests against President Bashar al-Assad.

Assad forces attacked al-Raml al-Filistini (Palestinian sand), named after a refugee camp built in the 1950s, at the weekend, as part of a campaign to crush a five-month uprising, which has intensified against major urban centres of protest since the start of the Muslim holy month of Ramadan on Aug. 1.

Latakia is of particular significance to Assad, from Syria's minority Alawite community. The 45-year-old president, a self-declared champion of the Palestinian cause, comes from a village to the southeast, where his father is buried. The Assad family, along with friends, control the city's port and its finances.

"Shelling and the sound of tank machineguns subdued today. They are bussing hundreds to the Sports City from al-Raml. People who are picked up randomly from elsewhere in Latakia are also being take there," said a resident, referring to a complex that was venue for the Mediterranean Games in the 1980s.

"Tanks are continuing to deploy, they are now in the main Thawra (revolution) street," said the resident, a university student who did not want to be identified.

"The reports about detention conditions and torture are increasingly alarming. Assad is backing himself more into a corner by using more and more violence and turning more Syrians against him," a diplomat in the Syrian capital said.

Citing witnesses in Latakia, the Syrian Observatory for Human Rights said a force of around 700 security personnel fanned across al-Raml, with houses being demolished in the neighbourhood "on the pretext they lacked construction permits".

"The Sports City's stadiums are serving to house refugees and prevent them from fleeing outside Latakia, and as we have seen in other cities that were assaulted, as a detention centre," Observatory Director Rami Abdelrahman told Reuters.

A Palestinian official described the military offensive in Latakia as "a crime against humanity", adding to Arab and international outrage at Assad's crackdown on popular demonstrations calling for an end to his autocratic rule.

The activists' group said the death toll was probably higher, but roadblocks and disrupted communications made it hard to gather information on casualties in the stricken city.

Syria has expelled most independent media since the unrest began, making it difficult to verify reports from the country.

A security official cited by Syria's official state news agency said security forces backed by an army unit had completed a mission in Latakia's al-Raml neighbourhood against "armed terrorist groups who have terrorised the citizens".

Unlike most of the rest of Syria, which is predominately Sunni, Latakia has a big Alawite population, encouraged to move there by offers from the ruling minority family of cheap land and jobs in the security apparatus and public sector.

A senior Palestinian official condemned the Latakia violence, which the United Nations said had forced between 5,000 and 10,000 Palestinians to flee the al-Raml refugee camp.

"The shelling is taking place using gunships and tanks on houses built from tin, on people who have no place to run to or even a shelter to hide in," Yasser Abed Rabbo, the West Bank-based PLO secretary general, told Reuters on Tuesday.

"This is a crime against humanity."

The United Nations agency which cares for Palestinian refugees said on Monday four had been killed and 17 wounded.

Apart from Deir al-Zor and Latakia, Syrian forces have already stormed Hama, scene of a 1982 massacre by the military under Assad's father, the southern city of Deraa and several northwestern towns in a province bordering Turkey.

Syrian authorities blame others for the violence, saying terrorist groups" have killed 500 soldiers and police. Rights organisations say at least 1,700 civilians have been killed by security forces since protests erupted in March.

Turkey, once a close ally of Assad, ruled out foreign intervention in Syria but said attacks on civilians were unacceptable, piling pressure on the Syrian leader.

Syrian forces killed at least one protester when they fired on a protest in the eastern city of Deir al-Zor on Tuesday, residents said, hours after the authorities said the army was pulling out.

Nibras al-Sayyah was hit by bullets fired by military intelligence personnel to disperse hundreds of people who marched at night after Ramadan prayers, the residents said.

Witnesses said most tanks and troop carriers had pulled out of Deir al-Zor, which they attacked on Aug. 7, and moved to the outskirts. Many troops remained in the city and were storming houses looking for wanted dissidents, they said.