U.N. observers in Syria described an attack on a village in the Hama region in which about 220 people were reported killed as part of a continuing Syrian air force operation 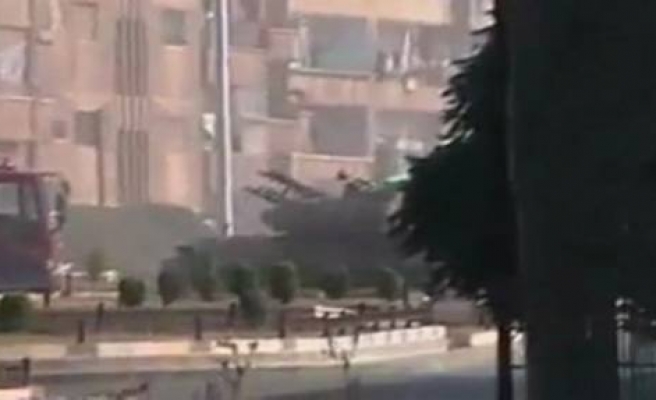 U.N. observers in Syria described an attack on a village in the Hama region in which about 220 people were reported killed as part of a continuing Syrian air force operation, the U.N. mission said in an assessment obtained by Reuters on Friday.

"The situation in Hama province continues to be highly volatile and unpredictable," said the "flash report" from the U.N. observer mission on Thursday's incident.

Opposition sources said about 220 people, mostly civilians, were killed in the village of Tremseh when it was attacked by helicopter gunships and tanks then stormed by militiamen who slaughtered some families on Thursday.

"The operation in Tremseh is assessed as an extension of the SAAF operation in Khan Sheikhoun to Souran over the recent number of days," said the two-page report by the U.N. mission in Syria, known as UNSMIS.

There were no independent accounts of the number of dead or how they were killed. If scores of civilians were killed, it could make it the worst atrocity in 16 months of fighting between rebels and the forces of President Bashar al-Assad.

According to the UNSMIS report, a patrol of unarmed U.N. military observers could get within only about 4 miles (6 km) of Tremseh on Thursday before being stopped by SAAF commanders because of "military operations."

The patrol observed the situation from a few different locations around Tremseh for about eight hours during which time it heard more than 100 explosions, sporadic small arms and heavy machinegun fire and saw white and black smoke plumes.

"The patrol received several calls from local contacts claiming 50 people had been killed and 150 wounded within Tremseh," the report said.

"Attempts to contact the local military commander during this period were unsuccessful," it said. "Patrols attempted to access Tremseh via alternate routes without success."

The report said the U.N. mission made further attempts to get a local ceasefire to allow the evacuation of civilians from Tremseh by contacting the Hama Governorate chief of police and the SAAF senior national liaison officer, but did not succeed.

The U.N. observers said they also saw several civilian trucks and cars moving through the area carrying armed men wearing a mix of military and civilian clothing and 10 ambulances, one of which was transporting an armed person.

UNSMIS was deployed to Syria in April to monitor a failed truce as part of international envoy Kofi Annan's peace plan. The U.N. Security Council must decide the future of the mission before July 20, when its initial 90-day mandate expires.

In a letter to the Security Council on Friday, Annan said the massacre in Tremseh showed that U.N. resolutions on Syria were being ignored, making it imperative to signal that there would be consequences.

In a letter to the Security Council U.N. Secretary-General Ban Ki-moon called it an "outrageous escalation of violence."

He said in a statement later on Friday that the reports of a massacre by Syrian government forces cast "serious doubts" on Assad's commitment to Annan's peace plan, which Assad had reiterated as recently as Monday.

"I condemn, in the strongest possible terms, the indiscriminate use of heavy artillery and shelling of populated areas, including by firing from helicopters," Ban said.

Russia has proposed extending the U.N. mission for 90 days, but Britain, the United States, France and Germany have countered with a draft resolution that threatens Syria with sanctions.

The Western-backed resolution would extend the force for 45 days and place Annan's peace plan under Chapter 7 of the U.N. Charter.

According to the draft resolution, Syria would face sanctions if it does not stop using heavy weapons and withdraw its troops from towns and cities within 10 days of the adoption of the resolution.

A Security Council diplomat, who asked not to be identified, said a statement had been circulated among members for approval on Friday that condemned the Tremseh attack and noted that use of heavy weapons by Syrian forces violated council resolutions.

But the diplomat said Russia's U.N. mission asked to consult with Moscow, so if a statement is eventually agreed to by all Security Council members it would not be released until Monday.

U.N. chief Ban has recommended shifting the emphasis of the work of UNSMIS from military observers to civilian staff focusing on a political solution and issues like human rights.

UNSMIS suspended most of its monitoring activity on June 16 due to increased risk from rising violence.

While the mandate for 300 unarmed military observers is likely to be unchanged, diplomats said they have been told that only half the number would be required for the suggested shift in focus of the mission. The others would return to their home countries, but be ready to redeploy again at short notice.