Syrian National Coalition spokesman Khaled al-Saleh said that the Israeli premier wanted to "promote his image in the minds of the Arab peoples and link it to the popular uprising in Syria indirectly." 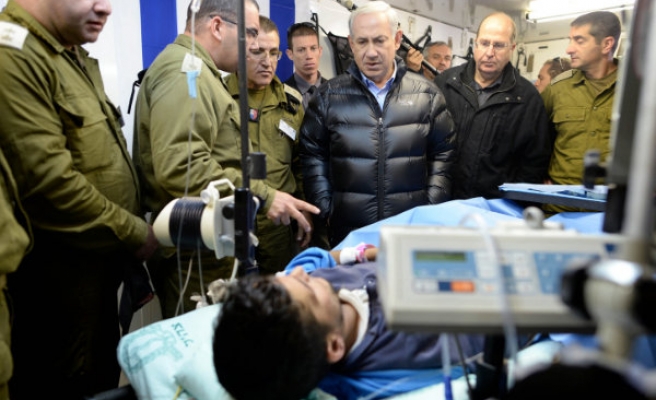 The main Syrian opposition alliance has slammed a Tuesday visit by Israeli Prime Minister Benjamin Netanyahu to a hospital in the occupied Golan Heights where some injured Syrians are being treated, saying it constituted "nothing but a public relations campaign."

Netanyahu's visit "is a well-studied step to hint at a possible relation between the Syrian uprising [against Bashar al-Assad regime] and the Zionist entity," Syrian National Coalition spokesman Khaled al-Saleh said in a statement late Wednesday.

Al-Saleh said that the Israeli premier wanted to "promote his image in the minds of the Arab peoples and link it to the popular uprising in Syria indirectly."

Netanyahu on Tuesday visited a Golan Heights field hospital that treats wounded Syrians as part of a campaign, he said, to unveil “the true face of Iran.”

“On the day that the world powers are opening talks in Vienna with Iran, it is important for the world to see pictures from this place,” he was quoted by Israeli media as saying. “This place separates the good in the world from the evil in the world.”

Al-Saleh said that the Israeli authorities "exploited the wounds of the injured Syrians and used them as means of promoting the occupation's image."

Dozens of injured Syrians are being treated at Israeli hospitals due to the siege imposed on their areas by regime forces, especially in the southern Daraa and Quneitra provinces on the border with Israel.

On Tuesday, the Syrian regime's official SANA news agency highlighted Netanyahu's visit to what it described "the terrorist mercenaries who are fighting in Syria."

"The visit is a new evidence of the limitless support by Israel for the armed, terrorist groups in Syria," the agency said in its report.