Syria: Pentagon armed rebels fight those armed by the CIA 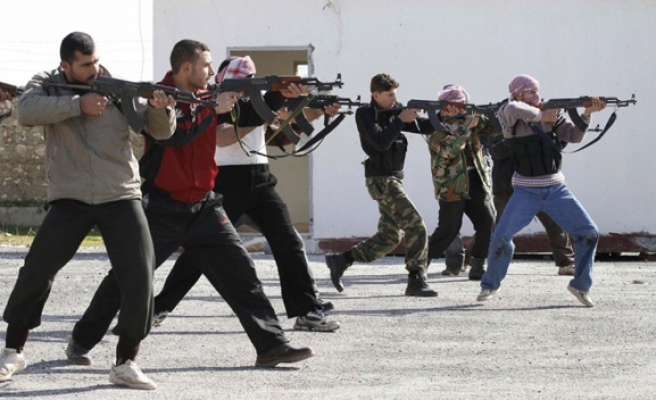 Syrian militias that have been armed by the CIA have clashes with those armed by the Pentagon near the besieged city of Aleppo and the Turkish border, showing just how little control U.S. intelligence officers and military planners have over the groups they have financed and trained in the five-year-old civil war.

The fighting has intensified over the last two months, as CIA-armed units and Pentagon-armed ones have repeatedly shot at each other while maneuvering through contested territory on the northern outskirts of Aleppo, U.S. officials and rebel leaders have confirmed.

In mid-February, a CIA-armed militia called Fursan al Haq, or Knights of Righteousness, was run out of the town of Marea, about 20 miles north of Aleppo, by Pentagon-backed Syrian Democratic Forces moving in from Kurdish-controlled areas to the east.

“Any faction that attacks us, regardless from where it gets its support, we will fight it,” Maj. Fares Bayoush, a leader of Fursan al Haq, said in an interview.

Rebel fighters have said that there have been similar clashes in the town of Azaz, a key transit point for fighters and supplies between Aleppo and the Turkish border, and on March 3 in the Aleppo neighborhood of Sheikh Maqsud.

The attacks by one U.S.-backed group against another come amid continued heavy fighting in Syria and illustrate the difficulty facing U.S. efforts to coordinate among dozens of armed groups that are trying to overthrow the government of President Bashar Assad, fight the Islamic State militant group and battle one another all at the same time.

It is an enormous challenge,” said Rep.Adam Schiff (D-Burbank), the top Democrat on the House Intelligence Committee, who described the clashes between U.S.-supported groups as “a fairly new phenomenon.”

“It is part of the three-dimensional chess that is the Syrian battlefield,” he said.

The area in northern Syria around Aleppo, the country's second-largest city, features not only a war between the Assad government and its opponents, but also periodic battles against ISIL, who control much of eastern Syria and also some territory to the northwest of the city, and long-standing tensions among the ethnic groups that inhabit the area, Arabs, Kurds and Turkmen.

“This is a complicated, multi-sided war where our options are severely limited,” said a U.S. official, who wasn't authorized to speak publicly on the matter. “We know we need a partner on the ground. We can't defeat ISIL without that part of the equation, so we keep trying to forge those relationships.”

Last year, the Pentagon helped create a new military coalition, the Syrian Democratic Forces. The goal was to arm the group and prepare it to take territory away from ISIL in eastern Syria and to provide information for U.S. airstrikes.

The group is dominated by Kurdish outfits known as the People’s Protection Units, or YPG. A few Arab units have joined the force in order to prevent it from looking like an invading Kurdish army, and it has received airdrops of weapons and supplies and assistance from U.S. Special Forces.

While the Pentagon’s actions are part of an overt effort by the U.S. and its allies against the Islamic State, the CIA’s backing of militias is part of a separate covert U.S. effort aimed at keeping pressure on the Assad government in hopes of prodding the Syrian leader to the negotiating table.

At first, the two different sets of fighters were primarily operating in widely separated areas of Syria — the Pentagon-backed Syrian Democratic Forces in the northeastern part of the country and the CIA-backed groups further west.