The official SANA news agency said a total of 15 people were wounded in opposition fire on Tuesday. 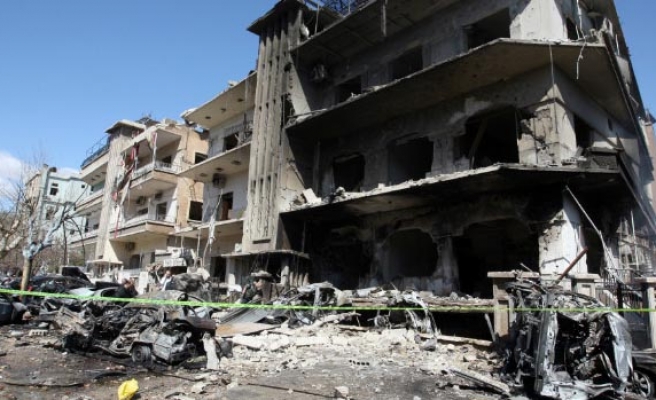 Rebels and rebels launched a fresh assault on east Damascus on Tuesday, just two days before another round of UN-backed peace talks get underway in Switzerland.

Clashes raged between regime forces on one side and opposition fighters and allied rebels from the Fateh al-Sham Front, formerly Al-Qaeda's branch in the war-ravaged country.

The renewed fighting in Damascus came two days after Syrian government forces repelled the largest rebel incursion into the capital in years.

Rami Abdel Rahman, head of the Syrian Observatory for Human Rights, said the blast was likely caused by a rebel car bomb attack on a regime position between Jobar and Qabun districts.

Plumes of dark smoke could be seen rising from eastern neighbourhoods.

Syrian warplanes were responding with steady air strikes on rebel positions in Jobar and regime forces had sealed all roads in the residential neighbourhoods nearby, according to state television.

It said government forces were also targeting rebel positions in several towns in Eastern Ghouta, a hotspot suburb of Damascus.

Rebels hold half of the eastern neighbourhood of Jobar, a few kilometres (miles) from the city centre, and are seeking to link it to the besieged northern district of Qabun.

"Our windows and doors rattle with each bombardment," Damascus resident Lamis, 28, told AFP.

"I'm frightened that these armed groups will advance further and I hope they will be stopped soon."

Syria's air force responded to the renewed rebel assault with raids on their positions while opposition fighters shelled the Abbasid and Tijara neighbourhoods near Jobar, the Observatory's Abdel Rahman told AFP.

The Islamist rebel group Faylaq al-Rahman and the Fateh al-Sham Front -- known as Al-Nusra Front before it renounced its ties to Al-Qaeda -- have a presence in Jobar.

Faylaq al-Rahman announced "the second stage of the battle" for eastern areas of the capital, in a statement issued Tuesday.

In the afternoon, Ahrar al-Sham -- an allied Islamist faction -- said its fighters had seized a textile factory between Qabun and Jobar.

In video footage posted online, Ahrar al-Sham fighters could be seen stomping on official portraits of President Bashar al-Assad inside the factory.

In addition to controlling half of Jobar and most of Qabun, rebels and their rebel allies also hold positions in the Damascus districts of Tishreen and Barzeh in the north, as well as Tadamun in the south.

Tuesday's violence was the second wave of an assault that began at the weekend and saw rebels and allied rebels initially score gains in Jobar, even briefly advancing into Abbasid Square -- two kilometres (1.2 miles) from Damascus' Old City -- for the first time in two years.

But Assad loyalists drove them back by nightfall and unleashed fierce bombing, the Observatory said, before calm was restored on Monday afternoon.

Thomas Pierret, a Syria analyst at the University of Edinburgh, said the offensive primarily had a "purely military motivation".

"The regime has advertised its desire to destroy opposition pockets in the eastern suburbs, so rebels took the initiative to harass regime troops with surprise attacks, scoring some success," Pierret told AFP.

The clashes on Sunday and Monday killed at least 72 people, including 38 government force members and 34 rebels and rebels, according to the Observatory.

"We were relieved yesterday when the roads reopened but today we are trapped once again," said Ola, a resident of east Damascus.

"I'm stuck in my bedroom," the 22-year-old student told AFP.

Syria's conflict erupted in March 2011 with protests against Assad's rule but has evolved over the years into a complex civil war.

More than 320,000 people have been killed and millions more displaced by the conflict.

Repeated peace talks over the years have failed to bring about a political solution, but another round of negotiations is due to begin in Geneva on Thursday.

A UN spokeswoman told reporters in the Swiss city that "all invitees who had already attended" talks in February had confirmed they would take part.

De Mistura himself is set to meet with Russian Foreign Minister Sergei Lavrov on Wednesday, according to Moscow.

Russia is a decades-long ally of the Damascus regime, but it has worked with rebel backer Turkey in recent months to try to bring an end to the conflict.