Despite a series of bilateral meetings earlier in the week, its efforts were almost simultaneously overshadowed by news that some rebel factions had decided to break ranks 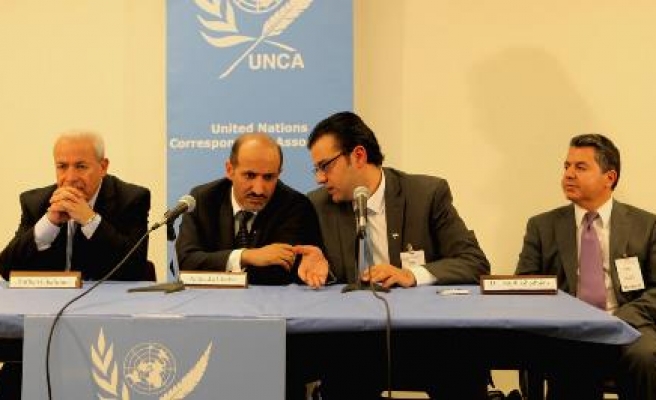 International opponents of Syrian President Bashar al-Assad reaffirmed support for the country's opposition coalition at the U.N. General Assembly this week, but with rebel forces splitting and delivery of weapons slow, the coalition looks increasingly marginalized.

After weeks of frustration as the international community turned its attention to negotiating a deal to rid Assad of his chemical weapons, the Syrian National Coalition, or SNC, had hoped to use the annual meeting to push its cause.

"We came to the U.N. to announce to the international community the disappointment of the Syrian people in its failure and its abandonment of their moral, political and legal obligations toward a people who are being slaughtered everyday," SNC President Ahmed Jarba told a news conference on Friday.

Despite a series of bilateral meetings earlier in the week, including the coalition's first with international mediator Lakhdar Brahimi, its efforts were almost simultaneously overshadowed by news that some rebel factions had decided to break ranks with the Western-backed Free Syrian Army, or FSA.

The FSA, an umbrella organization for many loosely affiliated brigades, recognizes the political leadership of the Western-backed coalition.

Some of the largest and most influential rebel factions, among them the Nusra Front, announced their rejection of the coalition and called for its reorganization under an Islamic framework.

Syria's opposition forces have been riven with factionalism since the 2-1/2-year revolt against Assad began. There have also been tensions between increasingly powerful Islamist groups and those that support a secular vision for a post-Assad Syria.

"The Syrian coalition and the FSA are in dire need of something that will increase their faith in the international community and their conviction that we all stand beside them," Saudi Arabia's foreign minister, Prince Saud al-Faisal, whose country has provided weapons to rebel groups, told delegates from the 100 nations of the so-called Friends of Syria on Thursday.

Although al-Faisal called for the SNC's backers to enhance military support to change the balance of power, the latest divisions are likely to make it more difficult for Western nations, particularly the United States, to authorize more arms supplies to the rebels given their fear that weapons could fall into the hands of radicals.

"The best tool to stop the extremists from affecting the future of Syria is to provide the highest levels of support for the moderates," said al-Faisal, adding that voicing concerns about weapons falling into extremist hands was an "excuse" not to act.

In response to the divisions, the FSA's chief, Salim Idriss, was forced to cut short meetings with French defense and intelligence officials in Paris to head to Syria to ascertain the degree of dissatisfaction with the SNC and FSA. Jarba also left for Syria on Friday.

"They have to see how bad this is," said one Western diplomat.

Coalition officials in New York had already spent much of the week deflecting questions about rebel defections while lamenting their "uphill struggle."

"Of course it's an added complication," said another Western diplomat. "This doesn't change the fact that there are viable moderate groups that we've worked with. On the contrary, it should strengthen our resolve to help them."

The coalition's leaders repeated calls for swift action in delivering heavy weapons, saying that both the United States and France - their main Western backers - were not doing enough, and had focused too much on the issue of chemical weapons.

The White House pledged in June to provide military aid to rebels in Syria and the SNC said this month that lethal assistance had been received from the United States. But the rebels have bemoaned that they have yet to receive anti-aircraft and anti-tank weaponry from Western states to turn the tide against Assad's forces.

U.S. officials say some U.S. small arms are being delivered to rebel groups who have been carefully vetted to ensure that they are not Islamist extremists. But the United States has been hesitant to provide rebels with heavier weapons.

For Western leaders, the priority appears to be to try to bring the opposition and Assad's government to the negotiating table. U.S. Secretary of State John Kerry and his French counterpart, Laurent Fabius, who hosted the Friends of Syria, made no reference to raising military aid in their speeches.

Both focused on efforts to revive talks for a political transition through new peace talks in Switzerland - the so-called Geneva 2 process - lauding the SNC for agreeing to attend, despite the balance of power on the ground shifting toward Assad.

"The SNC has endorsed Geneva 2, which is a critical part of that effort," Kerry said. "There is no military victory. Syria will implode before any side would claim a moral victory."