The group called for the U.N. Security Council to refer the issue of Syria to the International Criminal Court and to adopt targeted sanctions against officials carrying out abuse. 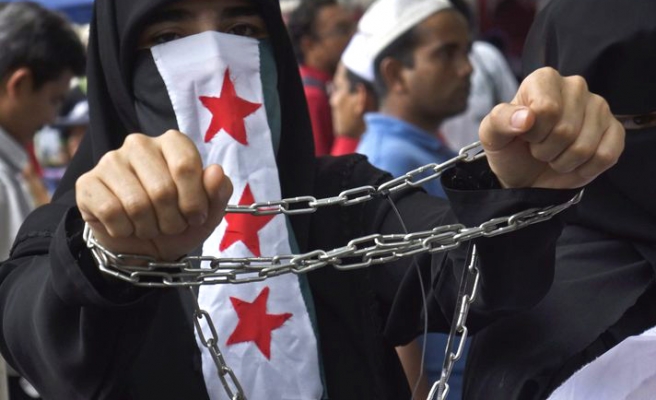 Syrian intelligence agencies are running torture centers across the country where detainees are beaten with batons and cables, burned with acid, sexually assaulted, and their fingernails torn out, Human Rights Watch said in a report released on Tuesday.

The New York-based rights group identified 27 detention centers that it says intelligence agencies have been using since President Bashar al-Assad's government began a crackdown in March 2011 on pro-democracy protesters trying to oust him.

Human Rights Watch conducted more than 200 interviews with people who said they were tortured, including a 31-year-old man who was detained in the Idlib area in June and made to undress.

"Then they started squeezing my fingers with pliers. They put staples in my fingers, chest and ears. I was only allowed to take them out if I spoke. The staples in the ears were the most painful," the man told Human Rights Watch.

"They used two wires hooked up to a car battery to give me electric shocks. They used electric stun-guns on my genitals twice. I thought I would never see my family again. They tortured me like this three times over three days," he said.

Human Rights Watch documented more than 20 torture methods that "clearly point to a state policy of torture and ill-treatment and therefore constitute a crime against humanity."

The group called for the U.N. Security Council to refer the issue of Syria to the International Criminal Court (ICC) and to adopt targeted sanctions against officials carrying out abuse.

"The reach and inhumanity of this network of torture centers are truly horrific," Ole Solvang, emergencies researcher at Human Rights Watch said. "Russia should not be holding its protective hand over the people who are responsible for this."

U.N. human rights chief Navi Pillay on Monday reiterated her position that the issue of Syria's conflict should be referred to the ICC in The Hague because crimes against humanity and other war crimes may have been committed.

She said both sides appear to have committed war crimes.

The United Nations has said more than 10,000 people have been killed during the 16-month Syria conflict.

The complete Human Rights Watch report, which includes maps of the detention centers, can be seen here: http://www.hrw.org/reports/2012/07/03/torture-archipelago-0