War-torn Syria is struggling to buy food commodities in the quantities it needs, despite repeatedly issuing tenders for hundreds of thousands of tonnes of sugar, rice and wheat, trade sources say. 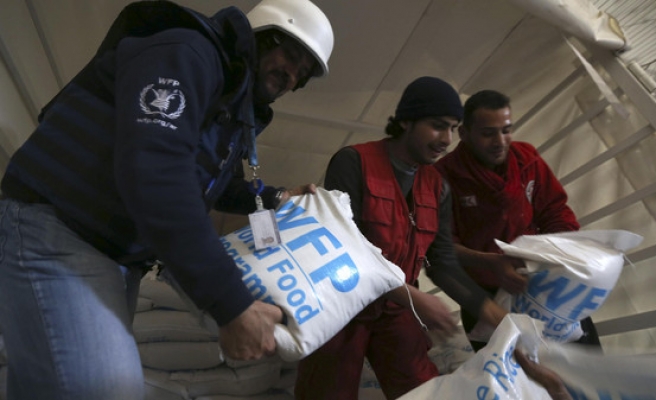 War-torn Syria is struggling to buy food commodities in the quantities it needs, despite repeatedly issuing tenders for hundreds of thousands of tonnes of sugar, rice and wheat, trade sources say.

The sources, who have knowledge of the country's commercial food deals, said the country's three-year civil war, which has claimed more than 150,000 lives and forced millions from their homes, is taking its toll, with large suppliers increasingly unwilling or unable to provide cargoes for the Syrian market.

"What we are seeing is a fragmentation of the business now. Smaller, fly-by-night outfits and new companies connected with the Syrian government are more active. This is not enough in terms of what the country needs to buy, and they cannot do the high-volume business to meet the demand," a Middle East-based trade source said.

On top of the risks of trading with a country wracked by violence, suppliers to Syria require licences from U.S. and European Union authorities, even for unrestricted humanitarian goods, which creates extra red tape.

U.S. headquartered agribusiness company Archer Daniels Midland Co said it had been a major supplier of agricultural commodities to Syria in the past.

"We are open to doing business with Syria today, but there are complexities associated with commodity trading in Syria," an ADM spokeswoman said.

"All exports to Syria are subject to general or specific licences, which require businesses to implement various processes and controls to ensure full compliance with the terms and conditions of those licences."

There are also extra complications for large consignments, which require more sophisticated financing and greater associated risk, which is driving down the size of trades.

"We are seeing much smaller trades being done now. There is too much risk in transporting bigger consignments to Syria at the moment," a European trade source said.

Before the war, larger consignments of, say, 60,000 tonnes of grain were typical, but the biggest cargoes in a recent sample of freight orders seen by Reuters for corn, bread-making wheat, white sugar and barley and feed wheat were for no more than 25,000 tonnes.

There is also a greater risk of non-payment, given the complex mechanisms needed to get round sanctions on Syria's banking system.

"Access to funds is constrained. Suppliers are wary of getting into contracts because they fear they won't get paid," said a source familiar with food security inside Syria.

Trade sources say efforts by Damascus to secure credit lines to buy food from its close ally Iran have also been hit as Tehran itself faces financing constraints due to sanctions over its nuclear programme.

"A lot of banks are nervous about any trade involving Iran or Syria and have huge compliance programmes in place. So you can find yourself having to satisfy multiple compliance teams that it is legitimate just to get paid," said Chris Hill of law firm Clyde & Co.

"The organisation is working toward activating the Iranian credit line after it faced several difficulties at the beginning of the year," Taweel told a Syrian state newspaper last week.

But Syria's needs are greater than ever, as civil strife damages its own food production.

The International Grains Council last week forecast Syria would need to import a record 1.9 million tonnes of wheat during the 2014/15 season (July/June) based on a domestic crop of 2.5 million tonnes. "With recent reports of the crop being even worse than we think, then that number will have to be revised higher potentially," IGC senior economist Amy Reynolds said.

The International Sugar Organization estimated Syria's sugar consumption at 800,000 tonnes in 2013/14, unchanged from 2012/13, and trade sources said Syria would need to import nearly all of that, as the war hit its domestic crop.

"Small sugar business is being done, especially in containers. It's a trickle," said another European trade source.

Leading global container shipping firm Maersk Line said it only offered a weekly call to Syria's largest cargo port Latakia via a third-party service provider and stopped calling at Tartous, the second-largest, in 2012.

France's CMA CGM, the world's third-biggest container group, said it still called at both Latakia and Tartous, but volumes were substantially lower.

That is partly down to the regulatory tape, but also the cost of and difficulty of finding insurance, said Doug Maag of law firm Clyde & Co.