The latest violence coincided with the start of the Muslim Ramadan fast, with Syria in sombre mood after troops stormed Hama and intensified an assault on the eastern tribal province of Deir al-Zor. 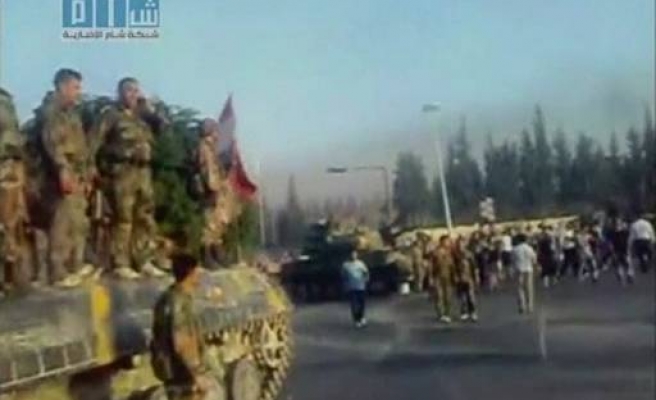 Syrian tanks shelled the city of Hama, scene of a 1982 massacre, for the second day on Monday, killing at least four civilians, residents said, in an assault to try to crush protests against President Bashar al-Assad.

The killings in the city's residential Hamidiyah district brought to 84 the number of civilians reported killed in a tank-backed crackdown on the central Syrian city, where Assad's father crushed an armed Muslim Brotherhood revolt 29 years ago by razing neighbourhoods and killing many thousands of people.

"No one can leave the town because the troops and shabbiha (pro-Assad militia) are shooting at random with machineguns," a resident, who gave his name as Raed, told Reuters by telephone.

Residents said among those killed on Monday was Khaled Adel al-Sheikh Mossa, whose house was hit in early morning shelling. A roof of another house collapsed and a pharmacy was destroyed.

The latest violence coincided with the start of the Muslim Ramadan fast, with Syria in sombre mood after troops stormed Hama and intensified an assault on the eastern tribal province of Deir al-Zor, which borders Iraq's Sunni Muslim heartland.

Residents said at least 29 civilians had been killed in a weekend tank assault on Deir al-Zor, the provincial capital.

"The shelling is concentrating on northern quarters. The tanks are pushing toward the centre," a witness told Reuters.

Syrian authorities have expelled most independent journalists since the anti-Assad protests began in March, making it hard to verify activists' reports or official statements.

Security forces, dominated by Assad's minority Alawite sect, had besieged Hama, a mainly Sunni Muslim city of 700,000, for nearly a month before Sunday's crackdown on the eve of Ramadan, a holy month when Muslims fast in daylight hours.

Many people flock to mosque prayers at night, occasions which protesters may use to launch more frequent protests.

In a letter to the military, Assad said that Syria was facing a foreign conspiracy to sow sectarian strife designed to "tear Syria into small statelets that compete to satisfy those who worked to slice them up".

The 1982 Hama massacre instilled such fear that few Syrians were ready to challenge the Assad family rule openly until this year, when many were inspired by the largely peaceful popular uprisings that toppled Arab autocrats in Egypt and Tunisia.

The Muslim Brotherhood accused the Alawite elite of waging sectarian warfare on Sunnis by attacking Hama.

"Syria is witnessing a war of sectarian cleansing. The regime has linked its open annihilation with the crescent of Ramadan. It is a war on the identity and beliefs of the Syrian nation ... on Arab Muslim Syria," it said in a statement.

The Syrian leadership blames "armed terrorist groups" for most killings during the revolt, saying that more than 500 soldiers and security personnel have been killed.

The Syrian state news agency said the military entered Hama to purge armed groups that were terrorising citizens, an account dismissed as "nonsense" by a U.S. diplomat in Damascus.

Footage posted on social media showed large parts of the city covered in smoke, and panic-stricken groups around dead or wounded people in the streets as gunfire rang out. Reuters could not independently verify the content of the videos.

Obama said he was appalled by the Syrian government's "horrifying" violence against its people in Hama and promised to work with others to isolate Assad.

The council was expected to hold closed-door consultations on Monday, a spokesman for Germany's U.N. mission said.

Turkey, one of Assad's main allies until the uprising, felt "great disappointment and sadness" over Sunday's death toll, Foreign Minister Ahmet Davutoglu said, blaming the use of tanks and heavy weapons for the high number of casualties.

"Such a start to Ramadan for Syrians is not acceptable. We condemn the attack," Davutoglu said, adding that Turkey had long urged Syrian officials to carry out promised reforms.

"We do want to see additional sanctions," British Foreign Secretary William Hague told the BBC. "We want to see stronger international pressure all round. Of course, to be effective, that can't just be pressure from Western nations, that includes from Arab nations, it includes from Turkey".

Seeking military action against Syria, even with U.N. authority, was "not a remote possibility", he said.

Russia and China have previously opposed any condemnation of Syria in the council, where they hold veto powers.

The European Union plans to extend sanctions on Monday by imposing asset freezes and travel bans on five more Syrians. EU sanctions already target Assad and at least two dozen officials, as well as Syrian firms linked to the military.

Assad has increasingly relied on security services and army units dominated by Alawites, at the heart of power since a 1963 Baath Party coup, to suppress protests in Sunni-majority Syria.