While the two men held talks in Damascus, Syrian forces killed at least 30 people and moved into a town near the Turkish border, an activist group said. 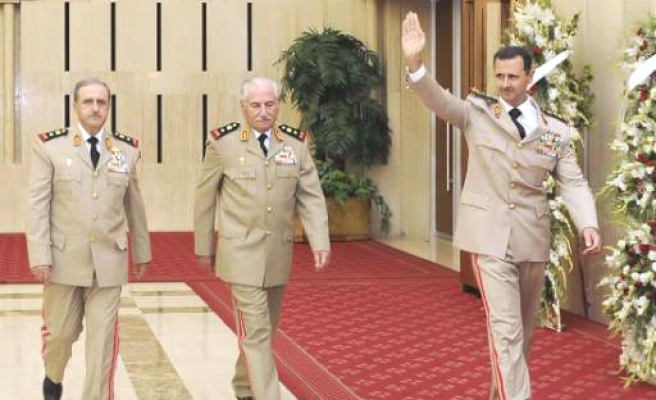 Syrian President Bashar al-Assad said on Tuesday his forces would continue to pursue "terrorist groups" after Turkey pressed him to end a military assault aimed at crushing protests against his rule.

Syria "will not relent in pursuing the terrorist groups in order to protect the stability of the country and the security of the citizens," state news agency SANA quoted Assad as telling Turkish Foreign Minister Ahmet Davutoglu.

"But (Syria) is also determined to continue reforms ... and is open to any help offered by friendly and brotherly states."

While the two men held talks in Damascus, Syrian forces killed at least 30 people and moved into a town near the Turkish border, an activist group said.

The National Organisation for Human Rights said most of the fatalities occurred when troops backed by tanks and armoured vehicles overran villages north of Hama, while four were killed in Binnish, 30 km (20 miles) from the border with Turkey.

Washington expressed disappointment at Assad's latest comments and said U.S. Secretary of State Hillary Clinton expected to talk to Davutoglu after his meetings in Syria.

"It is deeply regrettable that President Assad does not seem to be hearing the increasingly loud voice of the international community," U.S. State Department spokeswoman Victoria Nuland told reporters when asked about the comment.

Davutoglu held six hours of meetings with Syrian officials, including a two-hour session alone with Assad.

He told reporters on his return to Ankara that Turkey had demanded Damascus stop killing civilians and said his government would maintain contacts with all parts of Syrian society.

Davutoglu said Turkey hoped for a peaceful transition in Syria resulting in the Syrian people deciding their own future.

Neighbouring Turkey has grown increasingly critical of the violence but earned a sharp rebuke on Sunday when an Assad adviser said Syria would not accept interference in its affairs.

Syria has faced nearly five months of protests against Assad's 11-year rule, inspired by Arab revolts which overthrew leaders in Egypt and Tunisia earlier this year.