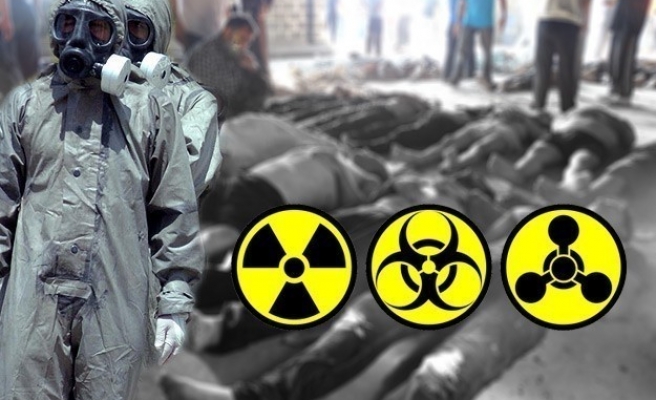 Syria will miss a major deadline next week in the programme to destroy its chemical weapons production facilities, sources at the Organisation for the Prohibition of Chemical Weapons said on Thursday.

Syria declared 12 production facilities to the OPCW and has until March 15 to destroy them under a deal agreed with the United States and Russia. Damascus has already missed several deadlines laid out in the agreement.

"That will definitely be missed," said an official involved in discussions with Syria, referring to the March 15 deadline.

The official, who asked not to be identified, said there were seven "hardened" aircraft hangars and five underground facilities. "None of them have been destroyed at the moment," the official said.

Syrian officials could not immediately be reached for comment.

Damascus agreed last year to destroy all chemical weapons facilities and surrender 1,300 metric tonnes of toxic agents to a joint OPCW/United Nations mission. It has until June 30 to eliminate its chemical weapons programme completely.

The deal averted U.S. missile strikes threatened by Washington after an August 21 sarin gas attack killed hundreds of people in the outskirts of the capital.

Syria missed a Feb. 5 deadline to ship all chemicals abroad for destruction and is weeks behind schedule. It has increased the handover of poisonous agents, including a shipment of mustard gas this week, but will not meet a March 30 deadline to neutralise all the chemicals overseas, sources at OPCW said.

That process was already supposed to have started on board the U.S. MV Cape Ray, a cargo ship outfitted with special chemical neutralisation equipment. But only a quarter of the so-called priority 1 chemicals, the most dangerous ingredients for chemical weapons, have been relinquished, officials said.

Syria is not taking the deadline for the destruction of production facilities seriously, another source at the OPCW said on Thursday.

"They are not doing things in the timeframe they promised they would," the source said. "The process is in volatile waters."

The latest comments in The Hague, where members of the OPCW are meeting until Friday, came after sharp criticism of the government of Syrian President Bashar al-Assad on Wednesday by the U.S. ambassador to the United Nations, Samantha Powers.

A Syrian request to convert for peaceful use some of the facilities declared under its weapons programme has already been rejected, because Western governments fear they could easily be re-converted for military use.

Damascus proposed "sealing" the sites with cement, the sources said, but that idea was dismissed by several Western diplomats at an OPCW executive council meeting this week.

"Destroyed means destroyed," the second source said. "Why should a country that used chemical weapons against its own people be given special privileges?"

Syria has missed almost every deadline of the agreement reached last year, which is being jointly overseen by the Nobel Peace Prize-winning OPCW and the United Nations. The OPCW said Syria will have shipped out roughly one third of its chemical weapons by the end of this week.

Missing the June 30 deadline would have serious political implications, with Washington and Moscow having both invested diplomatic credibility in the chemical weapons elimination process, brokered by U.S. Secretary of State John Kerry and his Russian counterpart Sergei Lavrov.

The international community is footing the bill for the complex operation involving ships from the United States, Norway and Denmark, Chinese and Russian security, an Italian port and commercial destruction facilities in Britain and Germany.