"The number of activists providing information to us in Dara is around 2,500," Abu Waseem stressed. 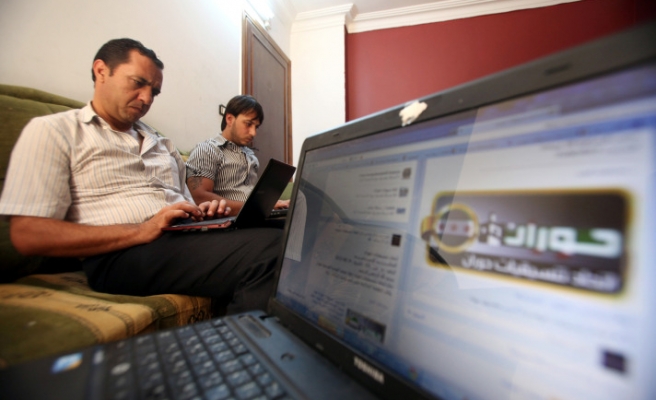 Syrian activists who report massacres in Syria to the international media have told the Anadolu Agency (AA) how they reach news and how they send their news to the world.

In order to protect themselves from the troops loyal to Assad and the Shabiha militia, Syrian activists use fake names and camouflage themselves.

Speaking to the AA, former director of the state-run Syrian Arab News Agency (SANA) in the city of Dara, Abu Waseem said that, once Assad's troops entered Dara, they witnessed terrible scenes worse than a nightmare and joined the Syrian opposition and migrated to Jordan as a family.

Having joined the Syrian activists in order to convey what is happening in the country to the international public opinion following the revolution, Abu Waseem said that their news were trustable and that they published news only after confirming it from three sources.

"The number of activists providing information to us in Dara is around 2,500," Abu Waseem stressed.

Abu Ibrahim, who joined the Syrian opposition in the earlier days of the revolution, said that the work districts of the activists were limited with where they lived and that they published news from the activists only after professional correspondents edited them.

"Activists have assumed positions at the entrance of cities. Their duty is to warn other activists if Assad forces are about to enter a certain city," Abu Ibrahim noted.

"We have difficulty in sending video footage. All footage placed on memory cards get sent to Jordan or Lebanon so they get shared with the international media," Abu Ibrahim indicated.

On the other hand, Abu Khalid al-Humsi, a Syrian who joined the opposition after writing notes against the Assad regime on walls, said that if an activist was arrested, this would pose a threat to other activists.

"In case an activist is arrested by security forces, we change all passwords, locations of meetings and lodging and shut down the e-mail address of the arrested activist," al-Humsi stressed.

"There exists cooperation between the Nusayri activists and us. Certain Nusayri members provided assistance to the Free Syrian Army in the field of intelligence," al-Humsi stated.

"The activists work as volunteers since the first days of the revolution. We have come together as friends without receiving the support of any national council or any delegation," al-Humsi also said.