The air strikes have hit a number of ISIL targets but have also killed many civilians in territory under the group's control. 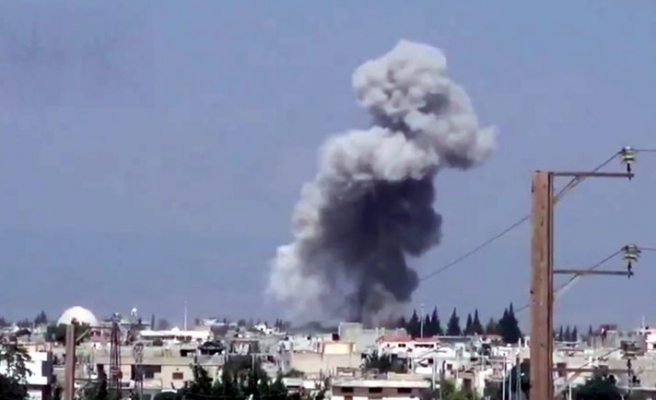 Syrian government warplanes killed at least 60 civilians including a dozen children in two days of air strikes on ISIL-held territory at the weekend, activists said on Monday.

President Bashar al-Assad's military has stepped up an aerial campaign over the last three months against ISIL that controls about a third of Syria's territory, much of it desert in the north and east.

The air strikes have hit a number of ISIL targets but have also killed many civilians in territory under the group's control.

The death toll included 41 killed during air strikes on Saturday that hit a bakery run by ISIL in their stronghold of Raqqa city in the north, the Britain-based Syrian Observatory for Human Rights said.

Another 19 civilians were killed in the eastern Deir al-Zor province, which borders Iraq and, like Raqqa province, is almost entirely controlled by ISIL militants.

The Observatory, which monitors violence in Syria through a network of sources on both sides, did not say how many militants were killed in the strikes, but in an earlier report it said at least 15 had been killed in the Raqqa strikes.

One Raqqa-based activist told Reuters the dead from the bombardment included eight members of one family, that of Khaled al-Haj Omar, and four from another family whose remains have not been found. The youngest was 7-year-old Ibrahim al-Abed, he said. Among the women killed were Ayesha Hassan, 60, and 18-year-old Zeina al-Ahmad, the activist said.

Confrontations between ISIL militants and Assad's forces have escalated sharply since the fighters made lightning advances against Iraqi government forces in June.

Since then ISIL has killed hundreds of Syrian government forces and seized three military bases in Raqqa province.

Syria's air force has bombed the group's positions, even as U.S. warplanes strike the group on the other side of the border in Iraq.

More than 190,000 people have been killed in Syria's conflict since it started more than three years ago, according to the United Nations. The daily death toll from shelling, gun battles, air strikes and executions regularly rises to more than 200 per day.