Alaa has been putting aside money everyday to feed the cats of the Masaken Hanano district in the city for two months. 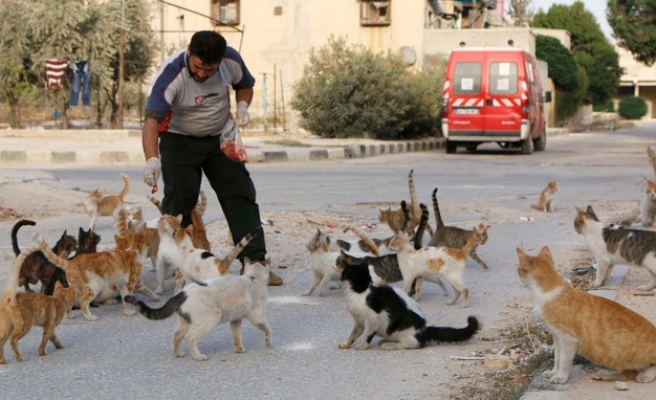 The three and a half year old civil war in Syria has claimed over 150,000 lives while millions of Syrians have been forced to flee their homes.

Amid the chaos, thousands of house pets have also been abandoned by their owners and left to fend for themselves in Syria's war-torn streets.

However, even in the most difficult circumstances where those who remain behind struggle to make it day by day in the cross-fire between regime forces and rebel groups, one ambulance driver goes out of his way to make sure Aleppo's stray cats don't go hungry.

Alaa has been putting aside money everyday to feed the cats of the Masaken Hanano district in the city for two months.

According to the Daily Mail, he feeds around 150 cats everyday.

The city of Aleppo has been severely damaged by barrel bombs dropped on civilian areas by regime helicopters, killing hundreds.

As Syria's second biggest city after the capital Damascus, it has been the scene of intense fighting between rebels and regime forces.

It is believed that around half of its residents have fled.