Armoured vehicles were involved in the clash in the Tel Shihab-Turra area that occurred after Syrian refugees tried to cross into Jordan. 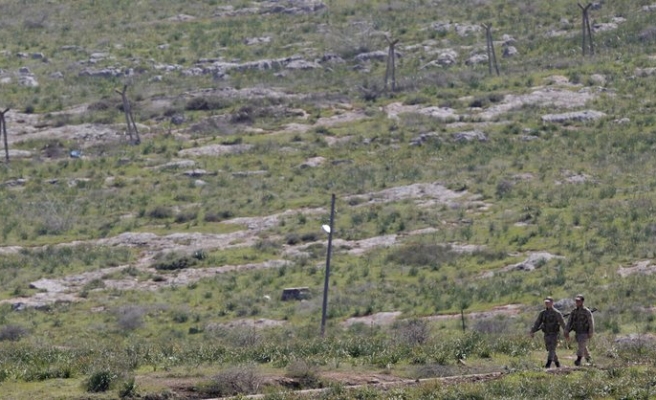 Fighting broke out between Jordanian and Syrian forces in a border region between the two countries overnight, but a Jordanian source said on Saturday no one on Jordan's side appeared to have been killed.

A Syrian opposition activist who witnessed the fighting said armoured vehicles were involved in the clash in the Tel Shihab-Turra area, about 80 km (50 miles) north of the Jordanian capital Amman, that occurred after Syrian refugees tried to cross into Jordan.

"The Syrian side fired across the border and fighting ensued. Initial reports indicate that there has been no one killed from the Jordanian side," said the Jordanian source, speaking on condition of anonymity.

Jordanian troops have fired near the border in the past to stop Syrians from shooting at fleeing refugees.

Western nations and regional powers fear the Syrian conflict could spill into neighbouring countries. The 17-month uprising has turned into a civil war with a sectarian angle that has the West lining up with Sunni Muslim nations behind the mainly Sunni rebels and against President Bashar al-Assad, a member of the Alawite minority sect, an offshoot of Shi'ite Islam.

Syria's long border with Jordan has been an escape route for opponents of Assad, including Prime Minister Riad Hijab who defected this week.

In Syria's largest city and commercial hub Aleppo, rebels fighting Assad's forces said they would hit back after losing ground under heavy bombardment. Residents in the city of 2.5 million have been fleeing in cars crammed with belongings.

The rebels have been pushed back from the Salaheddine district, which controls the approach to the city. They surged into both Aleppo and the capital Damascus last month in their boldest offensive of the uprising.

Assad's forces have repelled the rebels from Damascus, but are having a harder time dislodging them from Aleppo.

"I have about 60 men positioned strategically at the front line and we are preparing a new attack today," said Abu Jamil, a rebel commander near Salaheddine. Sniper fire had prevented his men from retrieving a comrade's body for two days, he said.

Some Salaheddine residents slipped back into the shattered neighbourhood to try to salvage possessions, despite army snipers. Two civilians were hit by gunfire in nearby streets.

One man with an apparent gunshot wound was dragged off the street by rebels and treated by medics before being taken to a field clinic. A second man was wounded in the back and arm. Blood soaked through the sleeve of his yellow jacket and his face was contorted in pain as rescuers put him in a vehicle.

In an apparent effort to project an air of normalcy, state television screened footage dated Aug. 10 of a calm Aleppo, including images of its ancient citadel - a U.N. World Heritage site - and cars flowing freely around a traffic circle.

In Damascus, residents reported shelling of the southeastern district of Shebaa and said nine tanks could be seen on the road heading out to the airport.

Assad is trying to crush the revolt against his family's 42-year rule in the pivotal Arab country. His mostly Sunni foes are backed by Sunni-led states like Saudi Arabia, Qatar and Turkey.

The United States imposed another round of sanctions on Friday that targeted Syria's state-run oil company Sytrol for trading with Iran, and the Lebanese Shi'ite militant group Hezbollah for aiding the Syrian government.

Repeated rounds of U.S. and European sanctions, announced every few months, have had a negligible impact on the war. Russia and China have blocked U.N. Security Council action that would have allowed tighter, global sanctions against Damascus.

U.S. Secretary of State Hillary Clinton will visit Turkey on Saturday, where she will discuss Syria with Turkish officials. Turkey, a NATO member and regional military power, has emerged as one of the main opponents of Assad.

U.S. officials are particularly interested in Turkey's analysis of the political forces emerging in Syria, hoping that together they can puzzle out the complex patchwork of rebel groups jockeying for position.

Iran, Syria's closest foreign ally, called for "serious and inclusive" talks between Assad's government and the opposition at a meeting of countries sympathetic to Assad in Tehran on Thursday.

"There will be no winner in Syria," U.N. Secretary General Ban Ki-moon said in a message to the conference. "Now, we face the grim possibility of long-term civil war destroying Syria's rich tapestry of interwoven communities."

Diplomats said veteran Algerian diplomat Lakhdar Brahimi could be named next week to replace the U.N.-Arab League envoy to Syria, Kofi Annan, who quit in frustration after his peacemaking efforts proved futile.

Assad's offensive to reassert control over Aleppo follows a successful drive to expel rebels from parts of Damascus that they seized after a bomb in the capital killed four of his senior aides on July 18.

His grip on the country has been eroded and his authority was further shaken by his prime minister's defection this week, but his forces have also consistently demonstrated their overwhelming firepower advantage against lightly-armed rebels.