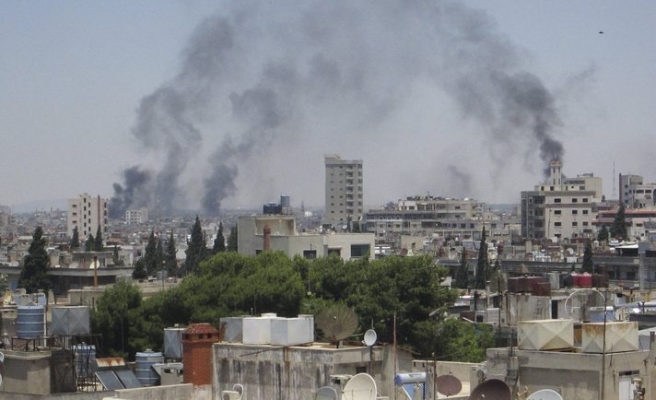 Syrian army has started to attack Aleppo city on Saturday.

Al-Assad regime's army, which has been dispatching tanks and soldiers along Aleppo border for days, has attacked Salah al-Din and Sikari neighborhoods with tanks and heavy armors.

According to preliminary information, two people with Free Syrian Army (FSA) were killed in the attack.

The Syrian Observatory for Human Rights, an opposition group which collects information on the uprising against Assad that has gripped Syria for the past 16 months, reported helicopter attacks on the central Salaheddine district of Aleppo and violent clashes elsewhere in the city.

The battle for the city of 2.5 million people is seen as a crucial test for a government that has committed major military resources to retaining control of its two main power centres, Aleppo and Damascus, in the face of a growing insurgency.

While neither side has managed to gain the upper hand, the outcome of the uprising is being watched anxiously in the surrounding region and beyond, amid fears that sectarian unrest could spread to volatile neighbouring countries.

Nearly 1,000 opponents have arrived in Aleppo in order to extend support to FSA.  The attack is expected to turn into a clash.

Free Syrian Army (FSA) is making its preparations against the attacks of Syrian army which uses artilleries, tanks and helicopters.

On Friday, Memun Gizzi, a commander with FSA, claimed that over 100 tanks were dispatched from Hama and Damascus to Aleppo, and the attack would be staged soon.

Gizzi said that people were concerned and some of the families began to leave the region. He added that Syrian army was already attacking the outskirts of Aleppo by tanks at night and by helicopters and war planes during the day. Gizzi said he feared a high death toll if Syrian army staged an attack.

Turkish Prime Minister Tayyip Erdogan said late on Friday that international institutions needed to work together to address the military assault on Aleppo and Assad's threat to use chemical weapons against external enemies.

"There is a build-up in Aleppo, and the recent statements with respect to the use of weapons of mass destruction are actions that we cannot remain an observer or spectator to," he said at a joint news conference in London with British Prime Minister David Cameron.

"Steps need to be taken jointly within the United Nations Security Council, the Organisation of Islamic Countries, the Arab League, and we must work together to try to overcome the situation," he said.

Earlier, Erdogan had cheered on the rebels.

"In Aleppo itself the regime is preparing for an attack with its tanks and helicopters ... My hope is that they'll get the necessary answer from the real sons of Syria," Erdogan said in remarks broadcast on Turkish TV channels.

Cameron said Britain and Turkey were concerned that Assad's government was about to carry out some "some truly appalling acts around and in the city of Aleppo".

U.N. rights chief Navi Pillay urged both Syrian government forces and rebels on Friday to spare civilians in Aleppo, voicing deep concern at the "likelihood of an imminent major confrontation" in the city reminiscent of other deadly assaults.

Turkish Foreign Minister Ahmet Davutoglu on Friday said that the developments in Aleppo, Syria were worrisome.

Speaking to reporters in central Anatolian province of Konya on Friday, Davutoglu said that the Syrian regime increased pressure on Aleppo with very serious heavy weapons and the air force.

"The use of air force on a civilian residential neighborhood turns such an act into an international crime," Davutoglu stressed.

In response to a question on the developments taking place at the Jordanian-Syrian border, Davutoglu said that he talked with the Jordanian Foreign Minister on the issue.

"The Jordanian Foreign Minister told me that they were preparing a big camp for Syrian refugees," Davutoglu said.
"The number of Syrians who have fled to Jordan is now over 140,000," Davutoglu underlined.

In regard to a question on the Assad regime and its preparation for a massacre in Aleppo, Davutoglu said that "the developments in Aleppo were worrisome".

"We have received intelligence that the Syrian regime is making a heavy military build-up in Aleppo. We are worried that there may be developments in Aleppo which may result in further human casualties. I am planning to speak with the UN Secretary General on this issue," Davutoglu noted.

"We are in touch with related countries on the issue of Syria. An attack on Aleppo would lead to more migration from the city and would be a blow to Syria's economy. A regime's efforts to destroy its own country are turning into crimes of humanity. We will make necessary initiatives on the matter. We will take the steps we have to. We are also closely monitoring the situation in the region that is between Aleppo and Turkey. Aleppo's preparation for a new term in stability carries high importance for us. Aleppo has a special place at the Turkish-Syrian border," Davutoglu stated.

"I will travel to the north of Iraq on either Tuesday or Wednesday. Barzani was here a few months ago. We had discussed all the developments then. We will have consultations with him on the new situation. We will also handle all activities in counter-terrorism. We will go over the developments in Syria and the region," Davutoglu stressed.