Assad's move to regain control of Hama, which for two months had seen huge demonstrations demanding his overthrow. 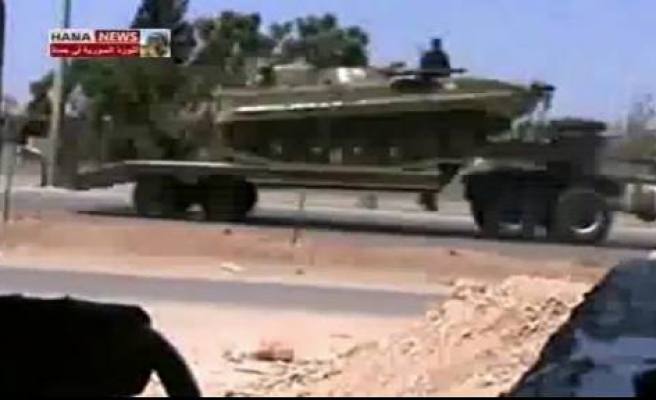 Syrian tanks and armored vehicles deployed throughout Hama Saturday, a resident said, after a week-long assault which one activist group said had killed 300 civilians in the symbolic center of protest against President Bashar al-Assad.

Activists said the death toll in protests across the country a day earlier, when tens of thousands of demonstrators took to the streets on the first Friday of the Muslim holy month of Ramadan, had risen to 26.

Assad's move to regain control of Hama, which for two months had seen huge demonstrations demanding his overthrow, prompted condemnation from the United Nations and sharp criticism even from Russia and Turkey, close friends of Syria.

"Yesterday's shelling and heavy machinegun fire have subsided. Tanks and armored vehicles have deployed everywhere in the city," said a Hama resident who would identify himself only as a business owner called Jamal.

Speaking by satellite phone he said water and conventional communications remained cut and electricity had come on for just four hours overnight. Streets were empty in the city of 700,000, traditionally a center of majority Sunni Muslim opposition to the domination of Assad's minority Alawite sect.

Assad's father, Hafez al-Assad, crushed an armed Islamist uprising in Hama nearly 30 years ago, killing many thousands of people and razing parts of the city's old quarter to the ground.

Hama stands as a symbol of defiance to the Assad family due to the 1982 uprising and because, until Bashar al-Assad sent in the tanks to crush the latest protests, it was the scene of some of the biggest demonstrations against his rule, with more than 100,000 gathering on Fridays to chant for his overthrow.

In their first public comments about the bloodshed, Gulf Arab States expressed the "greatest concern and regret" on Saturday over the "increasing violence and excessive use of force" in Syria, but did not directly criticize Assad.

Seeking to contain their own domestic dissent, and wary of any turmoil on their northern flank, the wealthy oil exporting Gulf states had so far kept silent over Assad's violent repression of demonstrations.

A statement by the six-nation Gulf Cooperation Council called for "an immediate end to violent actions and any armed activity, an end to the spilling of blood, recourse to wisdom, and carrying out serious, necessary reforms."

Syrian authorities blame the violence on armed groups and religious extremists they say have killed 500 police and soldiers. Rights groups say Syrian security forces have killed at least 1,600 civilians since the unrest erupted in March.

Syrian authorities have expelled most independent media since the unrest erupted, making it difficult to verify witness accounts and official statements.

Obama held separate phone calls with the European leaders and they all condemned the Syrian government's "indiscriminate violence against the Syrian people," it said.

The United States extended sanctions against Syria on Thursday to include a prominent businessman in the fourth round of sanctions which have targeted Assad, his brother Maher, top government officials and security forces.

The State Department also encouraged U.S. citizens in Syria to leave Friday, saying they should get out of the country while transport was still available.

Turkish Foreign Minister Ahmet Davutoglu, whose government once strongly supported Assad, said: "The developments there are unacceptable... Syria needs to take the messages from Turkey and international community seriously."

The official news agency said two security police were killed Friday in an ambush by an "armed terrorist group" on the main northern highway near the town of Maarat al-Numan, 70 km (40 miles) north of Hama.

Their patrol had gone to the highway "in response to calls by citizens after several cars were subjected to theft and terror on the highway," the agency said.

In the restive eastern province of Deir al-Zor residents said they were preparing for the army to storm the provincial capital. An Internet video showed what appeared to be tribal meeting discussing the apparent breakdown of talks with authorities and preparations to confront any military assault.