Opposition activists said at least 40 people had been killed in what they called the heaviest bombardment this month. 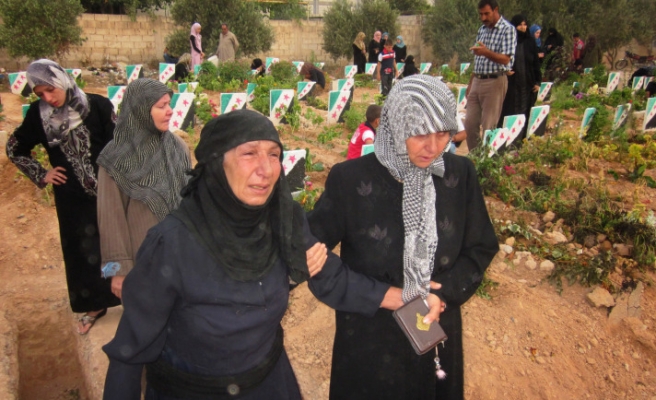 Syrian army shells crashed into southern Damascus on Wednesday and helicopters fired rockets and machineguns during an assault to shore up President Bashar al-Assad's grip on the capital, opposition activists said.

They said at least 40 people had been killed in what they called the heaviest bombardment this month.

"The whole of Damascus is shaking with the sound of shelling," said a woman in Kfar Souseh, one of several districts hit during the military offensive to root out rebel fighters.

At least 22 people were killed in Kfar Souseh and 18 in the nearby district of Nahr Eisha, activists said.

"There are 22 tanks in Kfar Souseh now and behind each one there are at least 30 soldiers. They are raiding houses and executing men," an opposition activist in Kfar Souseh, who gave his name only as Bassam, told Reuters by Skype.

More than 250 people, including 171 civilians, were killed across Syria on Tuesday, mostly around Damascus, Aleppo and the southern city of Deraa, according to the Syrian Observatory for Human Rights, a British-based opposition monitoring group.

Fighting a 17-month old revolt against Assad's rule, the army has used tanks and helicopter gunships this week in an offensive around the capital which has coincided with the departure of U.N. military observers after a failed mission.

Activists in the southwestern suburb of Mouadamiya said Assad's forces had killed 86 people there since Monday, half of them in cold blood. It was not possible to verify the report.

There was no immediate government account of the latest fighting, but state television broadcast footage of weapons it said had been seized from rebels in Mouadamiya, which was one of the first areas to join the uprising against Assad.

The United Nations estimates that 18,000 people have been killed in what has become a civil war after a violent state response to peaceful protests generated an armed rebellion.

The conflict, which pits a mainly Sunni Muslim opposition against a ruling system dominated by Assad's Alawite minority, threatens to destabilise neighbours including Lebanon, where Sunni-Alawite violence flared for a third day.

The death toll from the fighting in the northern Lebanese city of Tripoli rose to at least 10 with more than 100 wounded, medical sources said, in what residents said were some of the heaviest clashes there since Lebanon's 1975-90 civil war.

The Syria conflict has revived old tensions in Tripoli between pro-Assad Alawites in the hill-top district of Jebel Mohsen and their Sunni neighbours in Bab al-Tabbaneh below.

In Syria, Assad's forces have lost swathes of territory in recent months, but have fought back hard in Damascus and in Aleppo, the country's biggest city and its commercial hub.

Opposition sources said Syrian state forces had evacuated two security installations at Albu Kamal on the Iraqi border on Tuesday as rebels made gains after a week of heavy fighting.

They identified the installations as belonging to the Airforce Intelligence and Political Security agencies in Albu Kamal, 120 km (75 miles) southeast of the city of Deir al-Zor.