The protest mimicked the burning of Jordanian pilot Muath al-Kasasbeh 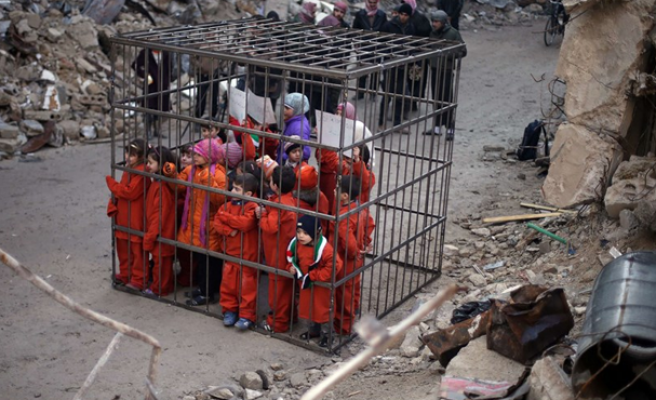 Anti-ISIS activist group, "Raqqa is being slaughtered silently", held a demonstration by placing a number of children and women in a cage to draw the worlds attention to the Esad regime's air attacks that saw hundreds of children being burned alive.

The children, wearing orange jumpsuits like those frequently seen in the group’s execution videos, were holding banners with slogans condemning President Bashar al-Assad.

The scene, recreated in the city of Doumak, was a terrifying image of the last moments live of Jordanian pilot Muath al-Kasasbeh and was used to protest against Bashar al-Assad. One putting up a sign in Arabic: “We saw your media about the burning Jordanian pilot but we didn't see it when Douma children were burnt.”