Rebels launched an offensive on Tuesday to take over downtown Aleppo. 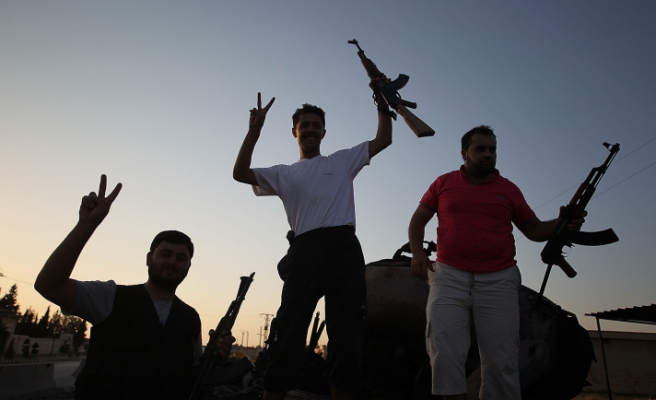 After a week of battles between President Bashar al-Assad's forces and his opponents in Damascus, fighting intensified in Aleppo, a more populous commercial city that long seemed immune to the 16-month-old upheaval convulsing Syria.

Rebels seeking to capture downtown Aleppo were combating Syrian troops and intelligence men at the gates of the Old City, a U.N. World Heritage site, residents and activists said.

The deaths in the prison mutiny were caused when Assad's forces used machineguns and teargas on inmates overnight, activists in contact with surviving prisoners said.

At least nine people were killed in army shelling of al-Herak, a town south of Deraa, the cradle of the revolt against more than four decades of Assad family rule, activists said.

Video posted on the Internet showed the shattered bodies of a veiled woman and six children in colourful pyjamas, some of them very young. Four lay on one doctor's table.

Activist accounts and videos are hard to verify independently due to Syrian restrictions on media access.

In Damascus, explosions and gunfire rocked the central district of Barzeh after government forces stormed in overnight, opposition activists said. Tanks prowled the streets of Midan, a neighbourhood recaptured by the army from rebels on Friday.

Several shells landed in the southern suburb of Hajar al-Aswad, where Assad's forces have been trying to dislodge rebels.

Elsewhere residents buried their dead or ventured back to check on homes they had fled to escape the fighting.

Outside Damascus and Aleppo, Assad's forces have used artillery and helicopter gunships to keep rebel fighters off balance in the last few days, while avoiding ground incursions, rebel and opposition sources said, saying Deir al-Zor and al-Herak were among towns suffering such long-range bombardments.

As the struggle for Syria intensified, Western leaders seized on an admission by Damascus that it has chemical and biological arms and could use them if foreign powers intervened.

U.S. President Barack Obama said the world would hold Assad and his entourage accountable "should they make the tragic mistake of using those (chemical) weapons".

Foreign Ministry spokesman Jihad Makdissi said the army would not use chemical weapons to crush rebels but could use them against forces from outside the country.

The Global Security website, which collects published intelligence reports and other data, says there are four suspected chemical weapons sites in Syria: north of Damascus, near Homs, in Hama and near the Mediterranean port of Latakia. Weapons it produces include the nerve agents VX, sarin and tabun, it said, without citing its sources.

With the conflict raging in Syria's two biggest cities, as well as many provincial ones, Western and many Arab nations are pushing for Assad's removal, although Russia, China, Iran and Iraq are among others opposed to any forced handover of power.

Turkish Prime Minister Tayyip Erdogan said the anti-Assad rebellion was "closer than ever to victory" and warned that Turkey would respond firmly to any hostility from Syria.

The head of the Arab League said in an interview published on Tuesday that Assad's days in office were numbered. "There is now no talk about political reform, but (about) a transfer of power," Nabil Elaraby told the pan-Arab newspaper al-Hayat.

Arab ministers on Sunday offered to provide Assad and his family with a safe exit if he relinquished power, but the Syrian leader has shown no intention of doing so.

Elaraby said he would soon travel to China and Russia, which have three times blocked U.N. Security Council resolutions on Syria, to try to persuade them to change course.

"Our message to the Russians will be, with clarity and frankness, that the veto decision they took is viewed as being against Arab interests," Elaraby said.

Russia again warned its citizens not to travel to Syria, citing the "extremely tense situation" and persistent fighting.

The ferocity of the Syria conflict, in which 1,261 people have been killed since fighting intensified in Damascus on July 15, according to one opposition watchdog, has concentrated attention on the possible repercussions of Assad's overthrow.

The death toll reported by the Syrian Observatory for Human Rights for the past week was by far the highest in an uprising in which activists say at least 18,000 people have been killed.

A week of unprecedented violence in Damascus, including a bomb attack that killed four of Assad's closest advisers, has emboldened rebel forces, although the Syrian army now appears to have regained control of most of the capital.

In the city's northeastern district of Qaboun, most streets were empty except for people returning to check on homes, some of which were destroyed in last week's fighting there.

"I came just to pick up some of my family's belongings, I am not returning for now," one woman said outside her building.

Groups of men were pulling corpses from the rubble of one building. "We have removed 25 bodies so far from this area, we are burying them quickly," one said.

An activist said 24 bodies of what appeared to be executed fighters had been found in Daraya, outside Damascus, on Monday.

The fighting has imposed hardships on civilians, with three-quarters of medical facilities in Damascus now closed and people who have fled their homes taking refuge in 58 schools or camping out in public parks, the U.N. refugee agency UNHCR said.

A UNHCR spokeswoman said that the number of displaced people within Syria had risen to about 1.5 million, up from the previous estimate of 1 million. More than 10,000 Iraqi refugees returned home from Syria in the past week, almost as many as the 13,000 who left in the first half of 2012, she added.

The mayor of the western Iraqi border town of Qaim said 300 Iraqi refugees had crossed there from Syria on Tuesday. "They look tired and scared but there was a warm reception for them in al-Qaim camp," Farhan Ftehkhan told Reuters.