Footage broadcast by Al Jazeera television showed the top third of the minaret crashing to the ground after being struck. 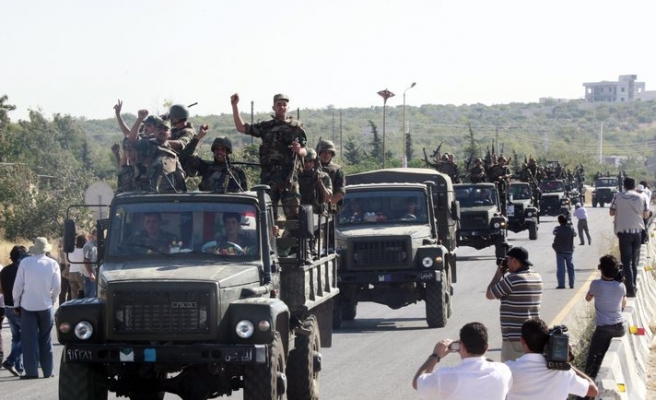 Syrian forces killed 15 civilians in the city of Homs on Wednesday, an activists' group said, despite international calls for President Bashar al-Assad to end a bloody crackdown on protests against his rule.

At least 1,700 civilians have been killed since the uprising against Assad's rule erupted in March, rights groups say. Syria says 500 soldiers and police have died.

State television said the army pulled out of the central city of Hama after a 10-day campaign in a symbolic protest centre in which scores of people were reported killed, and showed footage of troops leaving the northern town of Idlib.

But the Syrian Observatory for Human Rights said an armoured force killed at least 15 civilians in an assault on the Bab Amro residential district of Homs on Wednesday evening.

"The neighbourhood is witnessing a massacre," Observatory director Rami Abdelrahman told Reuters. Forces deployed in Homs, 165 km (100 miles) north of the capital Damascus, three months ago and occupied the main square, after large protests demanding an end to 41 years of Assad family rule.

Abdelrahman said two people were also killed in the suburbs of Damascus while a woman was killed earlier when troops and tanks swept into two northern towns near the Turkish border.

Syria has banned independent media from Homs and the rest of Syria, making it difficult to verify events on the ground.

In Deir al-Zor, witnesses said on Wednesday tanks and armoured vehicles had spread across the city, and residents had reversed earlier pledges to resist any army assault by force.

"The inhabitants of Deir al-Zor have taken a collective decision not to resist, so as not to give excuses to the authorities to spread their propaganda about terrorists and armed groups," one resident said.

"We are hearing the sound of machineguns and shells." He said he heard that soldiers and military intelligence officers had a list of 364 activists they were hunting.

Other residents had also reported that the army shelled the Othman Ibn Affan mosque, where protests had first erupted, he said. Footage broadcast by Al Jazeera television showed the top third of the minaret crashing to the ground after being struck.

The resident also said he saw troops spraying slogans on houses such as "Assad or no one" and "The people want the army to come in".

Authorities have denied that any Deir al-Zor assault took place. They say they have faced attacks since the protests erupted, blaming armed saboteurs for civilian deaths.

Hama and Deir al-Zor are populated mostly by majority Sunnis and the crackdowns there resonate with their co-religionists who predominate in the Middle East and govern most Arab countries.