Syrian forces clashed with rebels around Aleppo's television and a local rebel commander said his fighters were preparing for a "strong offensive" by government forces on the country's largest city. 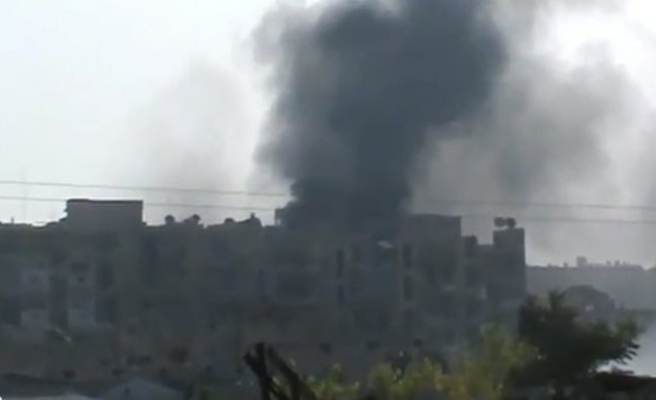 A Syrian army helicopter fired machinegun rounds and troops shelled rebel positions in Aleppo on Saturday, a Reuters witness said, as they tried to break through the insurgents' frontline in a battleground district in the country's largest city.

Earlier in the day, Syrian forces clashed with rebels around Aleppo's television and radio station, activists said, and a local rebel commander said his fighters were preparing for a "strong offensive" by government forces on the city.

Syrian troops backed by armour stormed the last opposition bastion in Damascus on Friday in a drive to crush a rebel offensive that coincided with a bomb attack that killed four of President Bashar al-Assad's senior security officials.

The onslaught continued on Saturday as jets bombarded the capital in a bid to snuff out resistance, a resident said.

Syria's civil war has intensified in the last few weeks, with fighting engulfing Damascus and Aleppo for the first time in the 17-month-old uprising against Assad family rule.

The two cities are crucial prizes for both sides in an increasingly brutal struggle that has eluded all attempts at a diplomatic solution and risks igniting a wider conflagration.

U.N. member states on Friday voted overwhelmingly to condemn the Syrian government at a special session of the 193-nation General Assembly that Western diplomats said highlighted the isolation of Assad supporters Russia and China.

Western and Arab powers want Assad to step aside but Russia and China have used their Security Council vetoes to block attempts to force him out. They say outside interference is prolonging the bloodshed.

In Aleppo's battleground Salaheddine district, rebels from the Free Syrian Army hid in alleyways, dodging the Syrian army's bullets and tank rounds that struck a building in the district on Saturday.

"There is one helicopter and we're hearing two explosions every minute," a Reuters reporter said.

A Syrian activist told Reuters the rebels had earlier sought to extend their area of control from the Salaheddine district, where the most intense fighting has been focused, northwards to the area around the television and radio station.

"The Free Syrian Army pushed from Salaheddine to al-Adhamiya where they clashed this morning with Syrian troops. But they had to retreat," the activist who identified himself as Barraa al-Halabi told Reuters.

A 19-year-old fighter called Mu'awiya al-Halabi, who was at the scene, said Syrian snipers surrounded the station and targeted the rebels.

"We were inside it for a few hours after clashes with the Syrian army but the Syrian army sent snipers and surrounded the TV station and as soon as morning came, the army started shooting. One of our fighters was martyred and four were wounded," he said.

The Syrian Observatory for Human Rights, which said 110 people had been killed on Friday, including 88 civilians, also confirmed the clash near the television and radio station. It said the terrestrial signal for Syrian television in Aleppo had been cut off.

Syrian television said a large number of terrorists, the term it uses for the rebels, were killed and wounded after they tried to storm the television and radio station in Aleppo.

A Reuters journalist who witnessed the clashes said a helicopter strafed rebel positions with machinegun fire near a police station which anti-Assad fighters took on Friday.

Black smoke rose into the sky from areas of Salaheddine, which is seen as a gateway for the Syrian army into the city of 2.5 million inhabitants. Its fate could determine the outcome of a war that has already claimed some 18,000 lives.

A different local rebel commander in Aleppo said he expected a Syrian army attack on rebels "within days", echoing Herve Ladsous, head of the United Nation's peacekeeping department, who said there had been a "considerable buildup of military means".

"We have information that the Syrian army is planning a strong offensive against Aleppo. We know they are planning to attack the city using tanks and aircraft, shooting at us for three to four days and they plan to take the city," Colonel Abdel-Jabbar al-Oqaidi said in Aleppo.

Faced with the Syrian army's superior firepower, Oqaidi said the rebels were counting on mass defections by government soldiers once the offensive started.

"At the moment the soldiers cannot leave their bases and they are too afraid to defect. Once they are inside our city they will take off their uniforms and join us," he said.

In Damascus, a resident in the Adawi neighbourhood just north of the central Old City district, said reported a loud explosion at 7 am (0400 GMT) and the sound of jets flying overhead.

"The bombardment has been continuous since 7 am (0400 GMT) in Tadamun district. It hasn't stopped for a moment," said the Adawi resident.

Syrian soldiers deployed on the streets, telling people to stay indoors because of clashes in the nearby Basateen area. On Friday they stormed Tadamun, the last rebel stronghold in the city.

Former U.N. Secretary General Kofi Annan, who is quitting as international peace envoy for Syria, said on Thursday that Assad should step down. He urged Syria allies Russia, China and Iran to persuade him to embrace political transition.

Annan complained of "finger pointing" at the United Nations while the bloodshed in Syria went on.

China on Saturday repeated its opposition to foreign intervention, saying the only solution had to be a political one which the Syrian people themselves decided upon. It also rounded on countries who criticised its stance on Syria.

"Those countries which have made unfounded criticism about China's position ... have, in pursuit of their own geopolitical interests in Syria, tried to hinder or undermine the political settlement process and are trying to shift responsibility for the difficulties on to other countries," foreign ministry official Wang Kejian told a news conference.

Assad's government, allied to Iran and Lebanon's armed Shi'ite Hezbollah movement, is at odds with Turkey and most of the Arab world, especially U.S.-aligned states such as Saudi Arabia and its Sunni-ruled Gulf partners.

Iran accused the United States on Saturday of pursuing its own interests in the Middle East. "America's technique for interfering in internal affairs of countries has changed," a foreign ministry spokesman said. "Instead of entering into expensive and long wars, they support the fostering of civil wars in the countries they are interested in."