Syrian forces backed by tanks killed at least three civilians in a large scale assault on Homs on Wednesday. 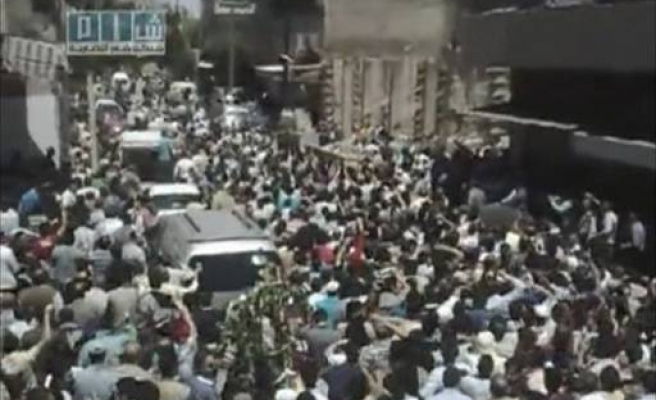 Syrian forces backed by tanks killed at least three civilians in a large-scale assault on Homs on Wednesday, activists said, in a renewal of raids on Sunni districts in the city where thousands have held pro-democracy protests."Most land and cellphone lines and the Internet have been cut off.

"Troops also deployed in Bab Sbaa, two explosions were heard in al-Khader neighbourhood and they sealed off the city centre."

Tanks and troops, largely from Syria's minority Alawite sect, moved into Homs four months ago and occupied the main square in the city to try to end protests demanding the removal of President Bashar al-Assad.

The Alawite sect dominates Syria's security forces and core army units that have besieged numerous towns and cities across the country to crush the six month uprising.

Homs, 165 km (100 miles north of Damascus) is mostly Sunni Muslim, like the rest of Syria. The hundreds of casualties reported in the city since the army deployment have been caused by assaults on Sunni areas. Activists have also reported the death of several Alawite residents in apparent revenge killings.

Residents said an Alawite militia loyal to Assad, known as shabbiha, has played a leading role in the raids and are responsible for some of the killings, raising tension between the two sects.

Activists and residents have reported an increasing number of defections among the mostly Sunni rank and file military in Homs and its surrounding countryside.

Residents of Rastan, a town near Homs, published footage purportedly showing defecting soldiers on a balcony greeting a crowd of several thousand people at a pro-democracy rally in the town last week.

Syrian authorities, which have not allowed independent media in the country since the uprising began in March, say there have been no defections in the military.

They say the troops were deployed in Syrian cities in response to appeals by inhabitants frightened by "armed terrorist gangs".