Turkey is alarmed at the growing influence of the Democratic Union Party and suspects it of links with the militant Kurdistan Workers Party. 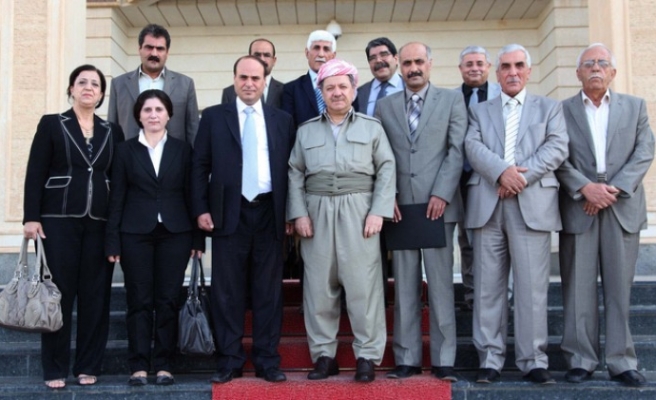 A Kurdish party that is extending its power in northern Syria as President Bashar al-Assad battles an insurgency raging elsewhere, warned Turkey not to interfere in the region where it fears rising PKK militancy along its border.

Turkey is alarmed at the growing influence of the Democratic Union Party (PYD) and suspects it of links with the militant Kurdistan Workers Party (PKK), which has fought a 28-year separatist conflict in Turkey that has killed more than 40,000 people.

Turkey says it will not allow "terrorist" groups to gain a foothold across the border in Syria, where Kurds make up some 10 percent of the total population - part of an ethnic group of millions that also reaches into Iraq and Iran.

"Turkey has nothing to do with the Syrian Kurds," PYD leader Mohammed Saleh Muslim shot back, denying anything more than ideological affinity with the PKK.

"The protection of my people in my areas, in my town: that is my right, no-one can deny it, and that's what we did. So there is no need for Turkey to be worried and make threats," he told Reuters via telephone from the Syrian city of Qamishli.

Saleh Muslim said the Syrian towns of Kobani, Derik and Efrin were now under Kurdish control.

A 17-month-old uprising against Assad is seen by Syrian Kurds as an opportunity to win the power enjoyed by their ethnic kin in northern Iraq where they live semi-autonomously from Baghdad.

But Syria's Kurds are not politically united and rivalries between the PYD and another group, the Kurdish National Council (KNC), have at times threatened to spiral into intra-Kurdish conflict.

Last month, the two parties signed a pact to form a joint council, presenting a united front to work for Kurdish interests in a post-Assad Syria.

But that unity may be less strong in reality than on paper.

The PYD was notably absent at a meeting in Iraqi Kurdistan last week between Turkish Foreign Minister Ahmet Davutoglu, the opposition Syrian National Council (SNC) and the KNC, to discuss the future Syria and the need for a peaceful solution to Turkey's Kurdish question.

"We did not join it because they didn't invite us," Saleh Muslim told Reuters.

Ankara has established closer ties with Masoud Barzani, the president of Iraq's Kurdish region, as it looks to expand business and energy stakes in northern Iraq - a rapprochement that analysts say could help Turkey gain leverage over Syria's Kurds.

"I think they (Turkey) are trying to marginalise the PYD in Syria by establishing good relations with the Kurdish National Council, which is very close to Masoud Barzani," said Jordi Tejel Gorgas, author of a book about Syrian Kurds.

Following the meeting in the Iraqi Kurd capital Arbil, the KNC's head of foreign relations, Abdul Hakim Bashar, described Davutoglu's position as "more advanced than before".

SNC President Abdulbaset Sieda, himself a Kurd, said it had not been Turkey's decision to leave the PYD out of the meeting and welcomed all parties committed to bringing down Assad.

"We hope from our brothers in the PYD that they will focus on the Syrian national project," Sieda told the Saudi-owned Asharq Al-Awsat newspaper, reflecting doubts about the PYD's priorities.

Turkey's support for the SNC has made it the object of suspicion among many Syrian Kurds.

"The Syrian National Council continues to take one step forward and one step back and is taking orders from parties who will remain unnamed," Saleh Muslim said.

"The Syrian Kurds are part of the Syrian people and the solution to the issue will be in Damascus".

Rivals accuse the PYD of being more interested in pursuing its own agenda, or the PKK's, than overthrowing Assad, and even of being in league with him, noting that PKK leader Abdullah Ocalan was sheltered for years by Assad's late father, Hafez al-Assad.

Some credit Kurdish territorial gains to Bashar al-Assad, who they say willingly handed control over three towns to the PYD in order to intimidate Turkey.

Saleh Muslim said such accusations were nothing more than an attempt to sully the PYD's reputation.