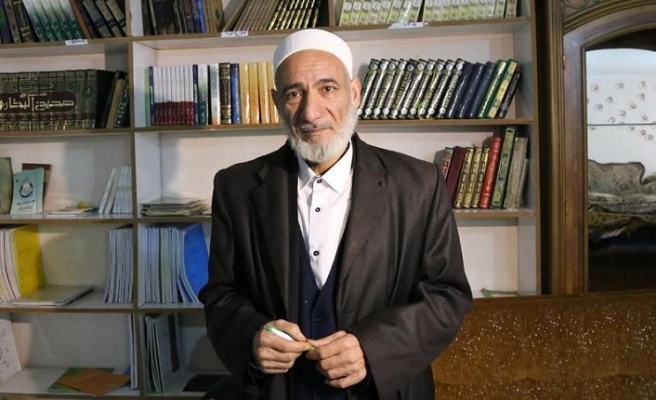 Syrian Kurds who took refuge in Turkey after fleeing the violence inside their country are afraid of returning home because of the threats and inhumane acts of the YPG/PKK terror group.

Turkey, which hosts more Syrians than any other country in the world, has been offering all kinds of support to war-torn families regardless of their ethnicity, religion or sect since the start of the civil war in Syria.

The country has spent more than $32 billion from its own national resources for helping and sheltering refugees since 2011.

Muhammed Mashar Hasan, 57, has been staying in southeastern Sanliurfa province for around six years, and is among the thousands of Syrians who took refuge in Turkey that continue to do their business just as they did in their own country.

Hasan, an Islamic scholar, teaches at an education center that he opened in the Haliliye district with the support of Istanbul-based Humanitarian Relief Foundation (IHH).

Recalling the suffering of Syrian people because of the conflicts and pressure of the terror group, he said Turkey hosts them in the best way and enables them to continue their professions.

“I cannot thank Turkey, the Turkish government and its people enough. Turkish people have hosted us in the best way for years. God bless them,” he said.

“Turkish government treats us the same way as everyone else. Regardless of Kurds or Arabs, they are offering the same aid to everyone ... It protects everyone.

Turkish officials recently blasted a U.S. conflation of "Kurds" with the terror group, saying an expected Turkish operation in Syria will target a terrorist group which threatens Arabs, Turkmens, and Kurds in Syria alike.

Hasan said: "If Kurds were comfortable in the places that YPG/PKK captured, they would not flee there and would not leave their houses. Because of the pressure of terrorists, many Kurdish families migrated to Turkey and Europe."

“People fled cruelty in their country, where they grew up and own their lands and homes because the YPG/PKK doesn't want anybody apart from their own people. They only accept their own ideology.”

The terror group does not allow people to practice their own religion, Hasan continued.

He said, "They are torturing religious people, falsifying Islam, banning worships. What they are saying in the name of the religion conflicts with Islam."

“That’s why we cannot return to our country," he added. "We surely want to return. We want to practice our religion comfortably just like everything."

The Syrian scholar voiced his hope for the war to be over, stability provided, terrorists gone and order established in Syria one day.

“We have been longing for our home and land for years because of these tyrants,” Ibrahim said.

“They seized our houses and lands and tried to recruit our young children by force. I couldn't allow this happen. That’s why we fled to Turkey.”

Stating that people there are people in very difficult conditions, he said: “We are thanking God as we were able to flee.”

“I hope our soils will be cleared of terrorists and will return to our home as soon as possible,” he added.