Syrian forces raided houses in Hama for the second day on Thursday, residents said, hours after the city's attorney general declared on YouTube he had resigned in protest against the suppression of street demonstrations. 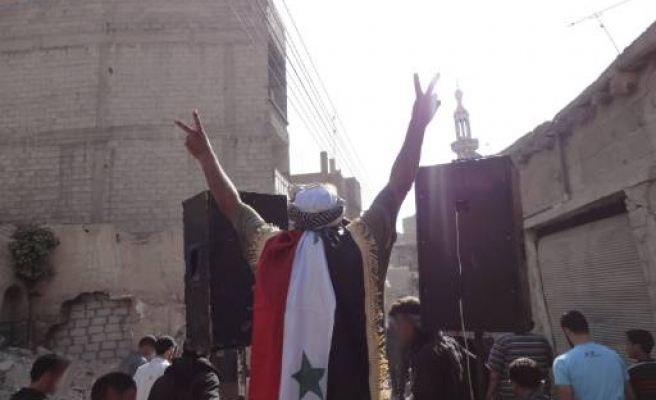 Syrian forces raided houses in Hama for the second day on Thursday, residents said, hours after the city's attorney general declared on YouTube he had resigned in protest against the suppression of street demonstrations.

Five months of protests have failed to unseat President Bashar al-Assad, who inherited power from his father and retains the loyalty of the core of his armed forces comprised mostly of members of the Alawite minority, the same sect as the president.

But demonstrators have been encouraged by the fall of Libya's Muammar Gaddafi and rising international pressure on Syria, including a planned European Union embargo on the oil industry which would disrupt a vital source of income.

Residents of Hama said security police and state militiamen, known as shabbiha, raided houses overnight in the al-Sabouniya and al-Marabet districts, after troops backed by tanks arrested dozens in two other neighbourhoods of the city the night before.

"The inhabitants are responding by shouting 'God is greatest' from windows and rooftops. Tonight there are more random raids as opposed to what the army did yesterday, which was go into specific houses looking for suspected activists on a list," Haidar, a local activist, told Reuters by phone.

Syrian forces mounted a 10-day operation in the city at the beginning of August and arrested hundreds of people.

The attorney-general of Hama said he had resigned because security forces killed 72 jailed protesters and activists at Hama's central jail on the eve of the military assault on the city on July 31. He said at least another 420 people were killed in the operation and were buried in mass graves in public parks.

"I, Judge Adnan Mohammad al-Bakkour, Hama province Attorney-General, declare that I have resigned in protest of the savage regime's practices against peaceful demonstrators," Bakkour said in a YouTube video released by activists.

An independent lawyer said the person in the video was Bakkour, who also denied reports by state media that he had been kidnapped by armed groups this week.

The official state news agency said television news channels that broadcast the Bakkour video "proved their professional bankruptcy" because they had ignored earlier official Syrian statements that Bakkour had been kidnapped.

"The kidnappers forced the attorney general to present false information. The channels have become a partner in the terrorist crimes against innocent Syrian citizens," the agency quoted Hama governor Anas Naem as saying.

If confirmed, Bakkour's resignation would be the first high profile defection in the uprising against Assad. The United Nations says more than 2,000 civilians have been killed since protests began in March.

French President Nicolas Sarkozy said on Wednesday that Assad had committed "irreparable" damage and that France and its partners would do everything possible to "help the Syrian people's aspirations to freedom and democracy".

Assad has repeatedly said he is fighting agents of what he calls a foreign plot to divide Syria. Authorities blame "armed terrorist groups" for most of the bloodshed and say more than 500 soldiers and police have been also killed.

Syrian authorities have expelled foreign media making it difficult to verify events in the country.

Several hundred women clad in black also marched in the southern city of Deraa, carrying placards calling for the downfall Of Assad.