Opposition leader Ahmed Tumah has said that the death of Zahran Alloush's could mark the beginning of more targeted assassinations by Assad government. 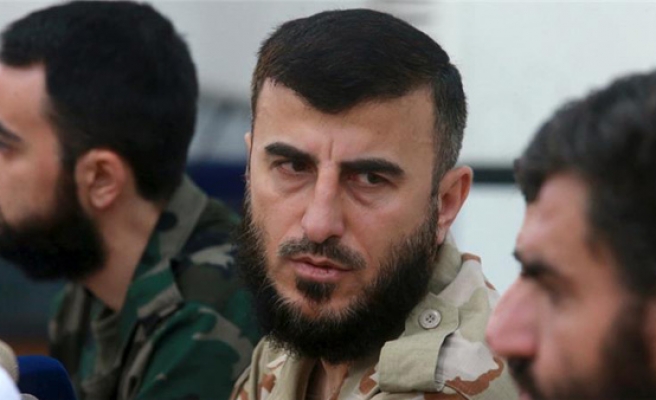 A plan to evacuate thousands of fighters and civilians from three besieged districts of Syria's capital was on hold Saturday, a day after an air strike killed a rebel leader.

Zahran Alloush, 44, was the commander of the Jaish al-Islam (Army of Islam) movement, the predominant opposition faction in the Eastern Ghouta rebel bastion east of Damascus.

A senior member of Jaish al-Islam said three planes had targeted a "secret meeting" of commanders, and confirmed that Alloush was among those killed.

The death of Syrian rebel leader Zahran Alloush is seen a major blow to the tenuous peace process, with the opposition's interim leader warning that other rebel commanders and political opponents could also be targeted for assassinations.

"They killed a man who was going to play a crucial role in Syria," Ahmad Tumah, the designated opposition prime minister, told Al Jazeera on Saturday.

"The death of Zahran could lead to more targeted killings of prominent opposition commanders and politicians."

Tumah accused the government of President Bashar al-Assad of deflecting attention from "the fight for political right and against tyranny" to a fight against ISIL, which he said is the main concern of the international community.

Tumah also said that while he still intends to attend the peace talks in Geneva, Switzerland, in January, Assad should not have any role in the future of Syria.

In a separate statement, the National Coalition for Syrian Revolutionary and Opposition Forces, an umbrella organisation headed by Tumah, condemned Zahran's killing, describing it as "a clear victory for terrorism and ISIL".

"It weakens the free army factions that confronted terrorism and undermined its foundations," the statement said.

"The attack is also an attempt to abort the UN efforts of a political settlement."

Jaysh al-Islam is said to have named Abu Hammam Bouwaidani as the successor of Alloush.

It also halted the planned evacuation of some 4,000 people, from three southern districts of Damascus.

The plan, according to a government official, would see the evacuees transferred out of Qadam, Hajar al-Aswad and the besieged Palestinian camp of Yarmuk on Saturday and into northern Syria.

They are expected to include members of ISIL  and Al-Qaeda-affiliated Al-Nusra Front.

But a security source close to the negotiations told AFP that the plan was now on hold because of Alloush's death.

"Jaish al-Islam was supposed to provide safe passage through areas east of Damascus for the buses heading to Raqa," ISIL's Syria bastion, the source said by phone.

"About 1,200 people were supposed to leave today (Saturday), but the death ofZahran Alloush means we are back to square one," he said.

He said buses that were standing by to transfer the evacuees left empty and "the plan was on hold until Jaish al-Islam reorganises itself".

Another source close to the negotiations said there was a "delay" in implementing the deal but that it was "still in place".

The Syrian Observatory for Human Rights described the deal as "frozen".

"It was frozen, but not cancelled, because of logistical issues linked essentially to the difficulty of providing safe passage," said Observatory head Rami Abdel Rahman.

The deal came after two months of intense negotiations between Syria's government and district leaders, according to the Britain-based monitor.

Their subsequent advance into Qadam in August took them closer than ever to central Damascus.

A similar deal earlier this month in the central city of Homs saw 2,000 rebels and civilians leave the last opposition-held neighbourhood.

Syria's conflict erupted in 2011 with anti-government protests but has spiralled into a multi-sided civil war across the country.

Jaish al-Islam's Alloush was a leading figure in the rebel movement in Damascus province, and had been holding a senior-level meeting in Eastern Ghouta when he was killed.

The jets launched two rounds of strikes on the meeting with four missiles each, the source said. At least 12 Jaish al-Islam members and seven from the Ahrar al-Sham group were killed.

Hours afterwards, leading members of Jaish al-Islam elected Abu Hammam al-Buwaydani as a replacement, according to the Observatory.

Buwaydani is a 40-year-old businessman and fighter from Douma in Eastern Ghouta who hails from a family with strong ties to the Muslim Brotherhood, the monitor said.

Last week, the UN Security Council unanimously adopted a resolution endorsing a proposed peace plan to bring the regime and opposition together for talks in January.

Jaish al-Islam was known to have extremist views and to have supported the establishment of an Islamic state before recently moving towards a more moderate position.

The group has remained firmly opposed to both Assad and to ISIL.